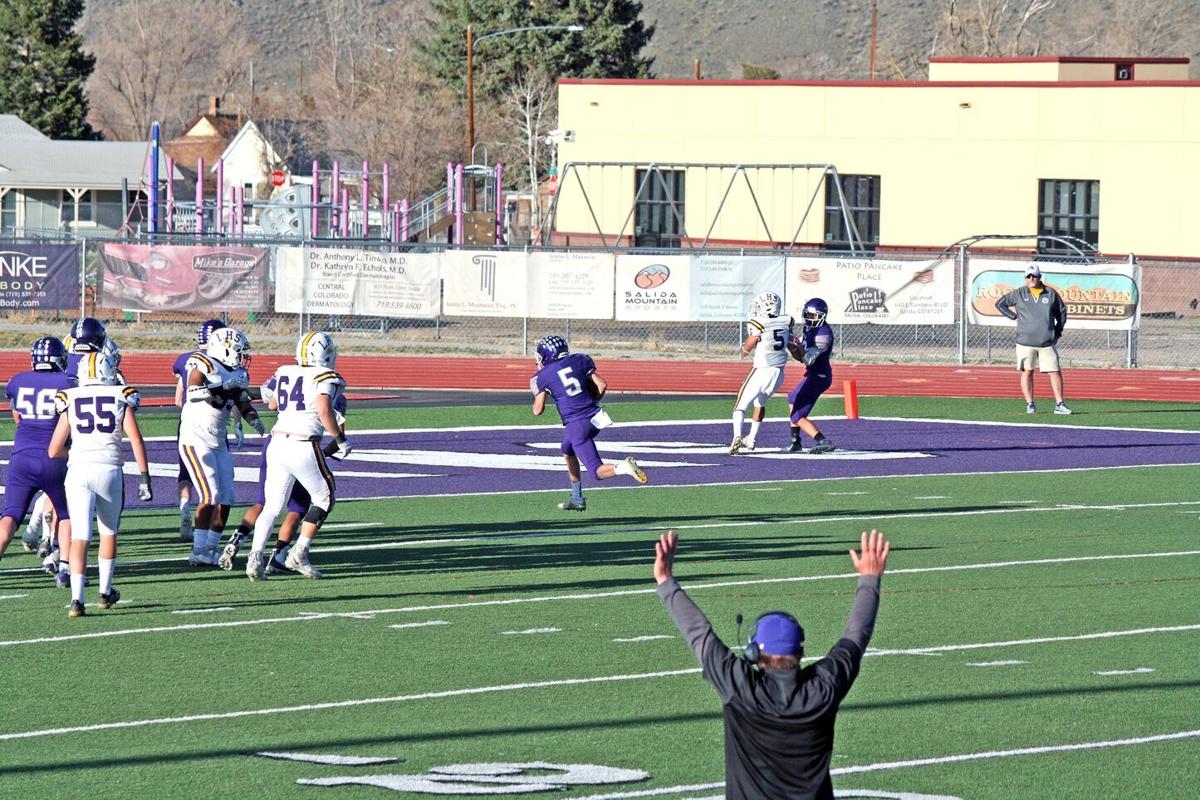 Freshman quarterback Caiven Lake fakes out the Littleton defense Thursday and runs into the endzone untouched for the Spartan’s first touchdown of the game. Salida beat Littleton 20-14 in their first win of the year. 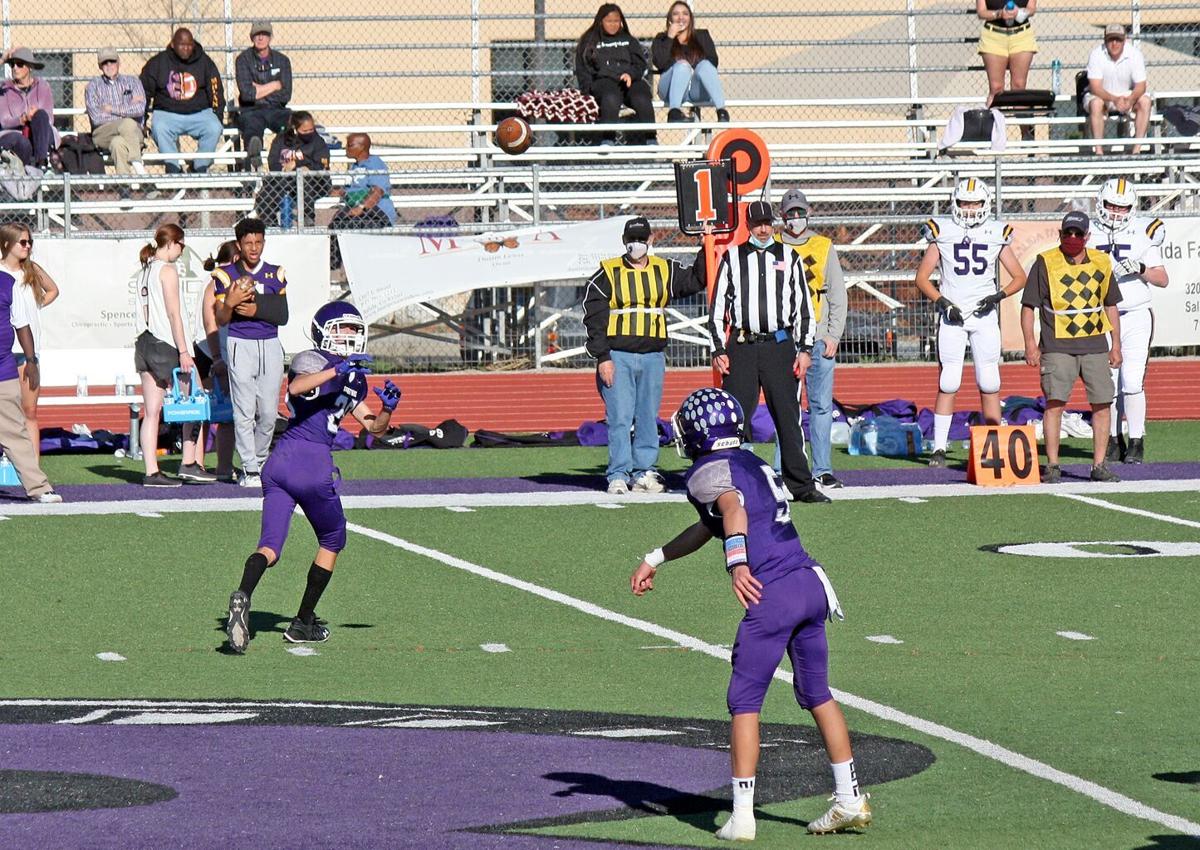 Freshman quarterback Caiven Lake throws to freshman Daniel Edgington Thursday in the Spartans 20-14 victory over the Littleton Lions. Salida scored all three of their touchdowns in about eight minutes in the second half.

Freshman quarterback Caiven Lake fakes out the Littleton defense Thursday and runs into the endzone untouched for the Spartan’s first touchdown of the game. Salida beat Littleton 20-14 in their first win of the year.

Freshman quarterback Caiven Lake throws to freshman Daniel Edgington Thursday in the Spartans 20-14 victory over the Littleton Lions. Salida scored all three of their touchdowns in about eight minutes in the second half.

Salida may have only scored two touchdowns all season before Thursday’s home game against the Littleton Lions, but they scored three more in about eight minutes to beat the Lions 20-14 for their last game of the season.

Salida started with the ball, and after a couple of first downs, their offense stalled, putting them into a fourth down and six position. The Spartans decided to go for it, but freshman quarterback Caiden Lake came up short, after he tried to pass, then scrambled four yards.

Littleton took over and tried a little trickery with their first play from scrimmage, running a double reverse, with a pump fake, to scramble for a few yards, but two plays later the Lions fumbled and Salida recovered.

Freshman Chris Graf began pounding it out up the middle for Salida, but a flag for holding pushed them back and they ended losing the ball on downs again.

The Salida defense and a flag for holding pushed Littleton into a fourth down and 18 position, where they were forced to punt back to Salida at the end of the first quarter.

Following an eight yard rumble up the middle by Graf, Lake fumbled after scrambling on a broken pass play, and Littleton recovered.

Littleton started to march down the field, helped along by a big pass reception for 43 yards.

The Salida defense stepped up again, forcing Littleton to try for a field goal, but a bad snap let the Spartans stuff the Lions and take over.

Salida began to march down the field, with solid runs by Graf, freshman Ashton Walker and senior Raymond Clinton.

Lake fumbled again, but sophomore Eddie Glaser was able to recover for Salida.

Salida got pushed back and turned the ball over on downs.

The Spartan defense stepped up again, and forced the Lions into fourth and 15, and they punted it away.

Unfortunately, Lake fumbled on the first play and Littleton took over with a vengeance, marching down the field to score with just 12 seconds left in the half.

Littleton tried for two but the Spartan defense stopped them and the teams headed to the locker rooms at halftime with the Lions up 6-0.

“We told the guys, that just like life, in this game, we are facing a lot of adversity at halftime,” coach Matt Luttrell said. “They needed to find a way to overcome that. I was so proud of them for stepping up. Just like all season, they could have just given up, but they stepped up in the second half and did a great job.”

Salida kicked off to start the second half. After a couple of plays, they forced a Lion fumble and freshman Brayden Pridemore recovered.

Salida started to move the ball down the field. At fourth and four Salida got Littleton to jump offsides for the first down, but were soon pushed back to fourth and 14.

Salida attempted to punt but Littleton blocked it and recovered.

Once again, the Spartan defense stepped up and stuffed Littleton, forcing them to punt.

Salida started on the 48-yard line, and began marching down the field. At 5:28 Lake faked the hand-off and ran into the endzone untouched. A failed two-point conversion tied it up 6-6.

Salida forced another fumble on the first play for Littleton, taking over on the ball.

Lake had a huge run for 30 yards down to the 2-yard-line, setting Graf up to punch it in up the middle. Salida took the lead for the first time in their season, 12-6.

After a couple of Littleton plays, Glaser intercepted, but Salida lost the ball three plays later on a fumble, heading into the fourth quarter.

Salida began to move it down the field before Graf ran it 15 yards for his second touchdown, putting Salida up 20-6 at 9:36.

After a couple of Littleton plays the Salida defense steped up again, this time with an interception by freshman Karl Brown.

The Lions responded with their own interception, which led to their second touchdown at 5:02 to make it 20-14.

Once again, the Spartan defense stood strong, and an interception by freshman Daniel Edgington finally caged the Lions.

“Both our offense and defensive lines really stepped up today. (Sophomores) Juan Rivera and Preston Martin really opened some holes for us today,” Luttrell said. “We are still working on cutting down our turn-overs, but overall all I’m extremely proud. It was a great way to end the season.”

Lake led the Spartan offense with 125 yards rush, 39 passing and one touchdown.

The win puts Salida at 1-6 for the season.