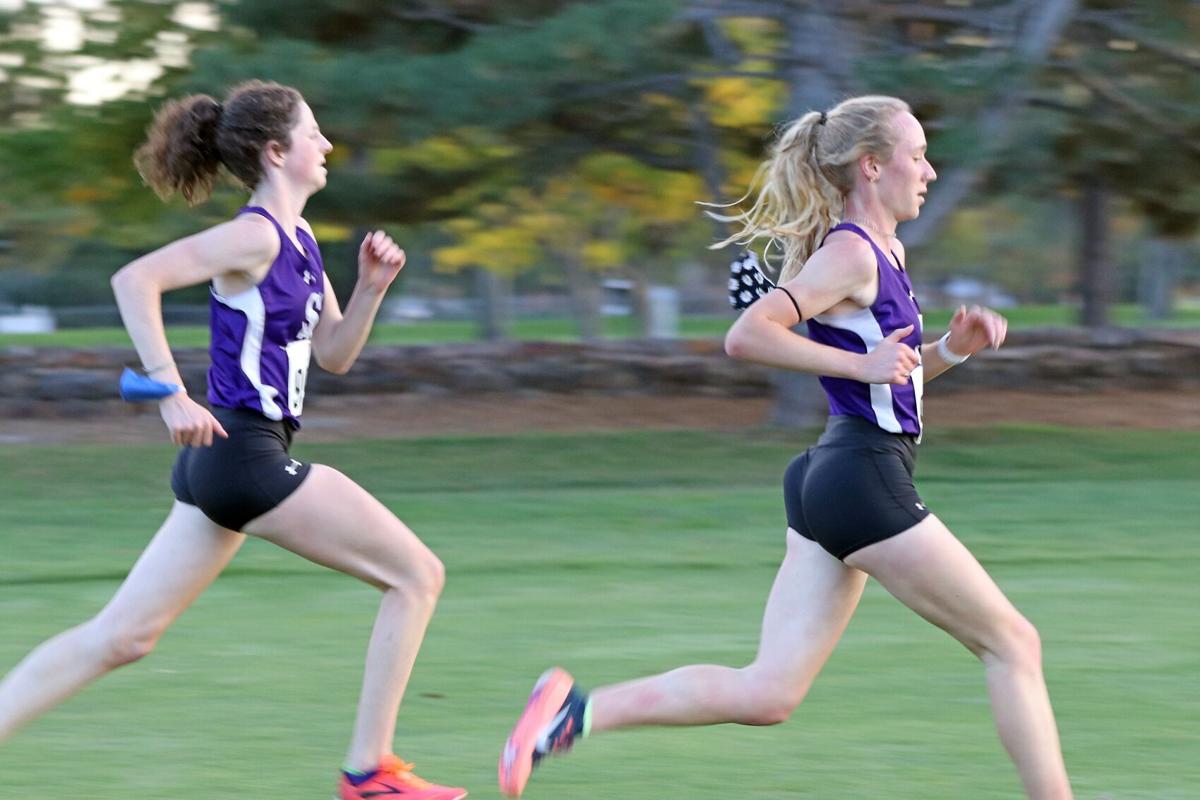 Lanee Dziura, left, and Kaylynn Shaffer run Friday in Pueblo at the regional meet. The Lady Spartans finished second to advance to state. 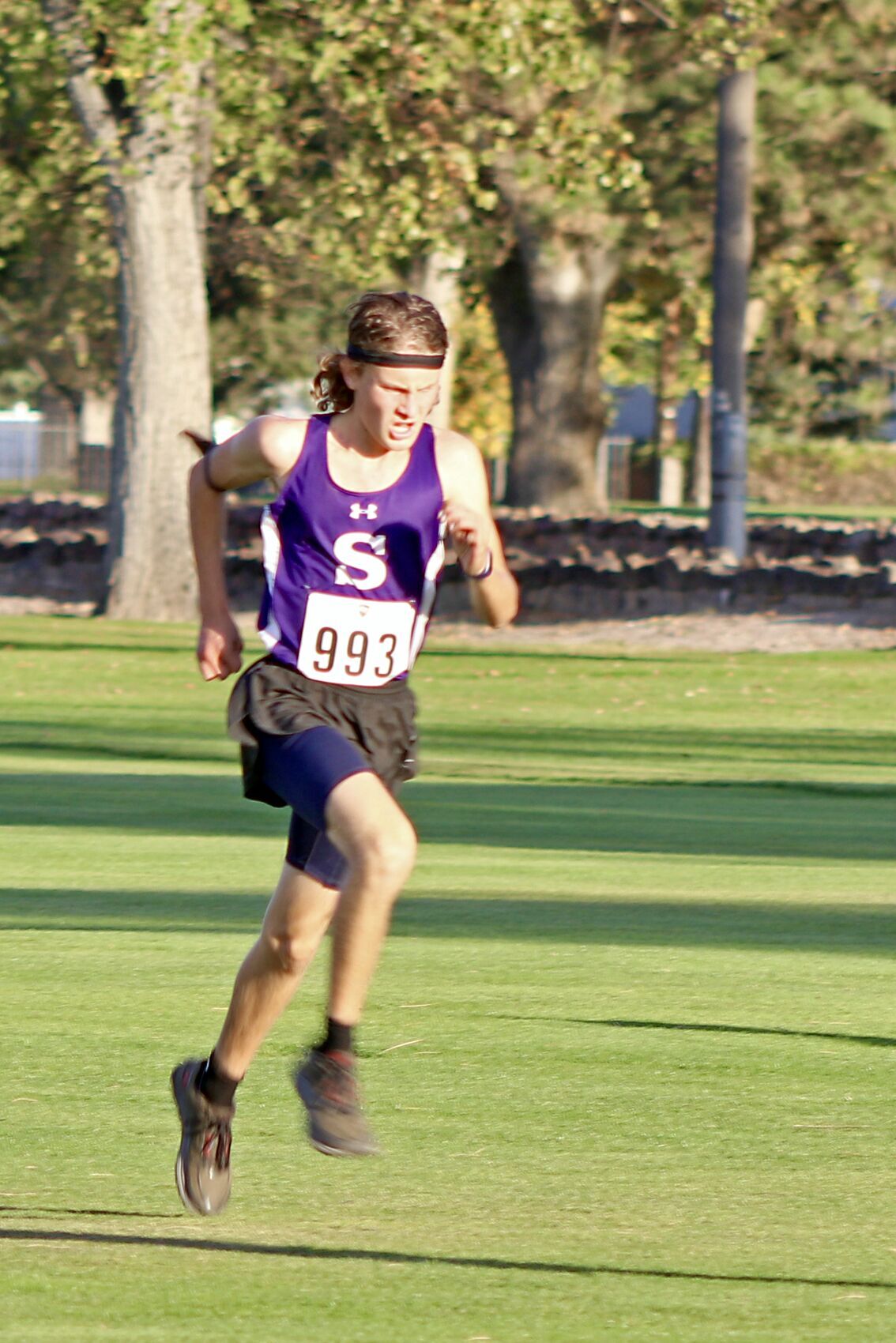 Izayah Baxter competes for Salida at the 3A Region 2 Championships Friday in Pueblo. Baxter and the Spartans finished second to qualify for state.

Lanee Dziura, left, and Kaylynn Shaffer run Friday in Pueblo at the regional meet. The Lady Spartans finished second to advance to state.

Izayah Baxter competes for Salida at the 3A Region 2 Championships Friday in Pueblo. Baxter and the Spartans finished second to qualify for state.

The Salida boys and girls cross country teams both overcame adversity to punch their tickets to the state championships with runner-up finishes at Friday’s regional meet.

Due to COVID-19, qualifying for the meet had a different format this year.

Only the three teams in each region would qualify instead of the usual four and only two individuals not on a qualifying team would make the big dance.

To make it even tougher to qualify, the Spartans had to compete short-handed at Pueblo’s Elmwood Golf Course.

Junior Kuper Banghart, who had been the team’s No. 2 runner most of the season, was unable to run after learning he had type-one diabetes.

“This was tough news for me and life changing news for Kuper,” Wilcox said.

“We join Kuper with a sense of relief as we now have some answers to what has been ailing him during the past month.

“We look forward to when Kuper will be able to join us again. You certainly gave us added motivation to run today.”

On Tuesday, Salida found out it will be without two more runners after a positive case of COVID-19 had infected a SHS student.

After contact tracing ran its course, senior Fern Clark and sophomore Logan Merriam found out that they had to go into quarantine and would miss regionals.

And if that wasn’t enough, the team couldn’t hold official practices during the three days leading up to the regional meet.

“Workouts were sent out and the coaching staff trusted our athletes to get the job done,” Wilcox said. “Judging by how well they ran today, it would seem that these athletes are more than capable.”

The coach said the boys’ team pulled “a herd of rabbits” out of a hat on Friday.

While Elijah Wilcox was in the hunt for the regional title, Hollis Beddingfield and Izayah Baxter made some big strides and soccer player Arlo Follet pinch hit for the Spartans and ran his first 5k.

“At the two-mile mark, Elijah was hounding Manitou’s Henry Ilyasova,” the coach said.

“If you remember, Ilyasova topped Elijah by 26 seconds last week to win the Tri Peaks 3A title.

“Right behind Elijah, pressure was being applied by Branden Davis of Lamar and Matthew Edwards of TCA.

“Anyone of the four were in a position to win 2/3 of the way through. Davis, who finished seventh at the state meet in 2019, made a decisive move on the backstretch about 2.25 miles in.

“After this move, the order and gap between Davis, Ilyasova and Elijah remained mostly unchanged to the finish chute.”

Beddingfield, meanwhile, beat Manitou’s No. 2 runner by 36 seconds after finishing 51 seconds behind him at the league meet. Beddingfield ended up placing 12th in 18:05.

Izayah Baxter also closed the gap on Manitou’s Kian O’boyle, finishing two seconds behind him to place 18th Friday in 18:43.

Follet also added his name to Salida cross country lore by stepping in for Banghart, the coach said.

“We called in a big pinch hitter and his name was Arlo Follet,” coach Wilcox said.

“Arlo is a soccer player by trade and was put on the fast track this week to get ready for his first 5k.

“It is reported that his last race was the one-mile Goblin Gallop in fourth grade.

“I can’t make this stuff up. We were able to squeeze Arlo into wave one and he teamed up with Hollis and Izayah.

“This group of three began at the back of the 25-person wave through half a mile. If you had been watching the race a couple minutes in, you might not have liked Salida’s chances.

“I was extremely happy with how our guys started and we all know that state berths aren’t handed out at the mile mark.

“Hollis really locked in at this point and you could tell that something big was in store. Izayah followed Hollis’ lead and Arlo held on valiantly.”

“In the end, Tristan did enough to lift the Spartans to a runner-up position and Otis took advantage of his opportunity and now owns a new PR (personal record),” coach Wilcox said.

In the team race, No. 1 ranked TCA had six runners place in the top-10 to take first with 30 points.

Salida finished second with 90 while Lutheran grabbed the final qualifying spot with 91 points.

The Lady Spartans also had to race against a No. 1 ranked TCA squad, but Salida ran smart Friday.

“The last time we faced off with TCA, we were run through a buzz saw,” coach Wilcox said.

“Lesson learned and we were intent on running races that suited our style much better today.

“Number one ranked TCA was not going to be our focus today, but Elizabeth was.

“Season results suggested that Elizabeth held a slight edge on the Lady Spartans although we had never raced head to head. This battle was never close.

“By the time Elizabeth’s third runner had finished, Salida had already finished scoring.”

“Quinn Smith led Salida with a fourth-place finish in 20:23.

“Near the front of the race, Quinn was doing her best to blend in with a group of TCA runners,” coach Wilcox said.

“Whenever you find yourself running with a bunch of TCA gals deep in a race, you know you’re having a good day!”

Her time was only two seconds away from a PR.

“If we’re going to talk about monster finishes, we have to talk about Kaylynn,” the coach said. “We’re not just talking about some glory kick over the last 100 meters.

“Oh no, we’re talking about a long-sustained drive for home that spanned a couple of minutes. ... Kaylynn had her finest moment of this crazy season.”

“Ladies, this was an impressive team effort,” coach Wilcox said.

“Your belief in yourselves and your teammates has the ability to move mountains. Let’s go do it again next week!”

Salida will now race in the Class 3A state championships Saturday in Colorado Springs.