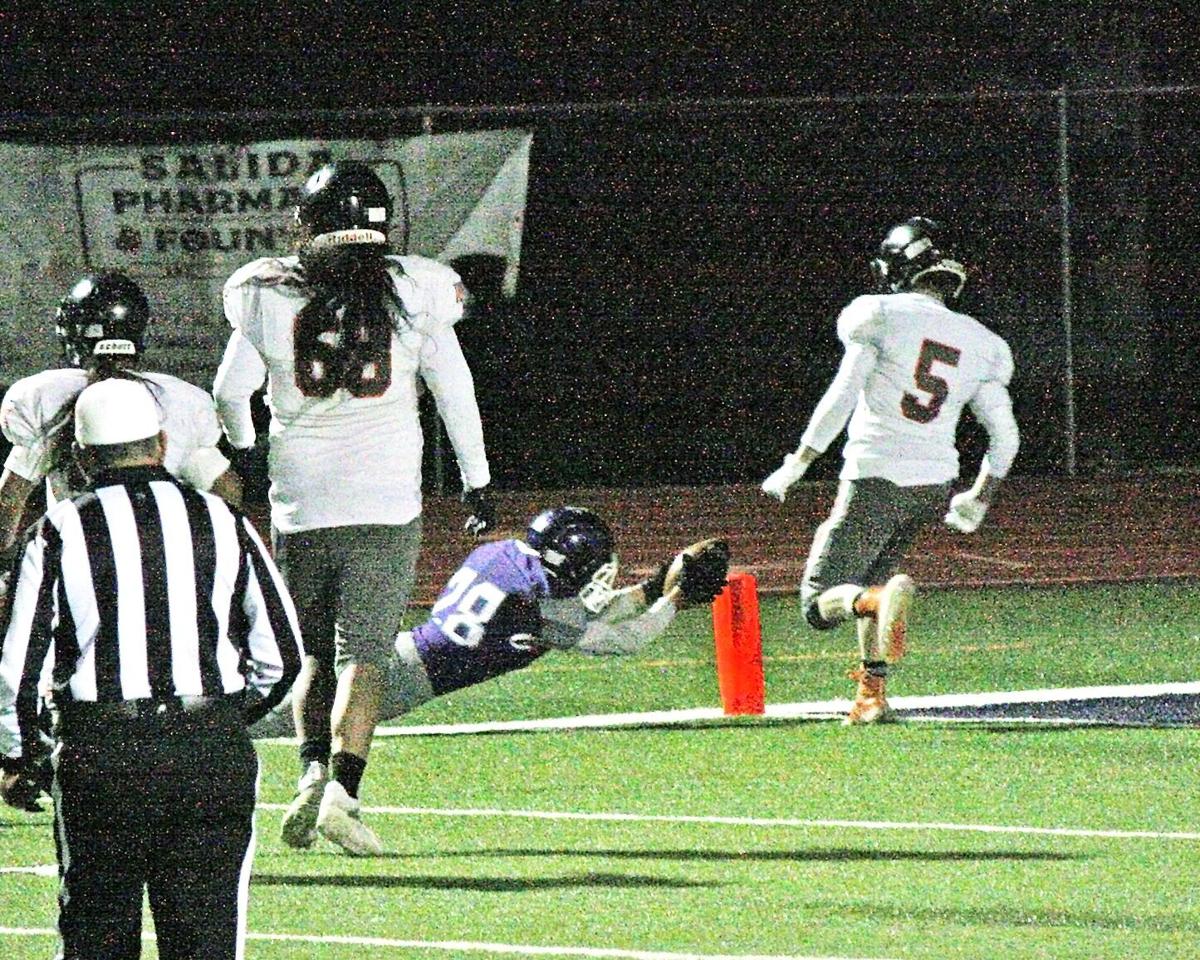 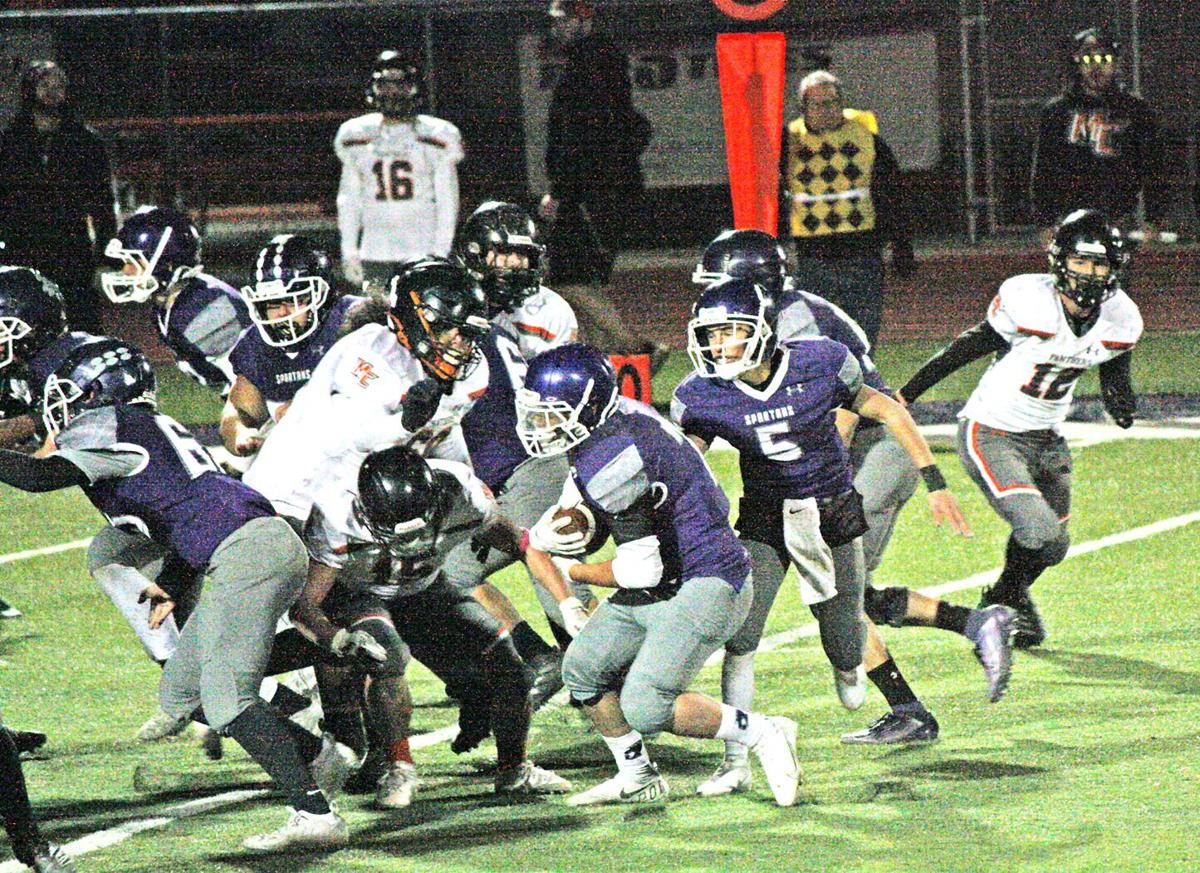 Salida High School sophomore Caiven Lake hands off to senior Brewer Matthews Friday in the Spartans’ win over Montezuma-Cortez. It was Salida’s last game of the season. 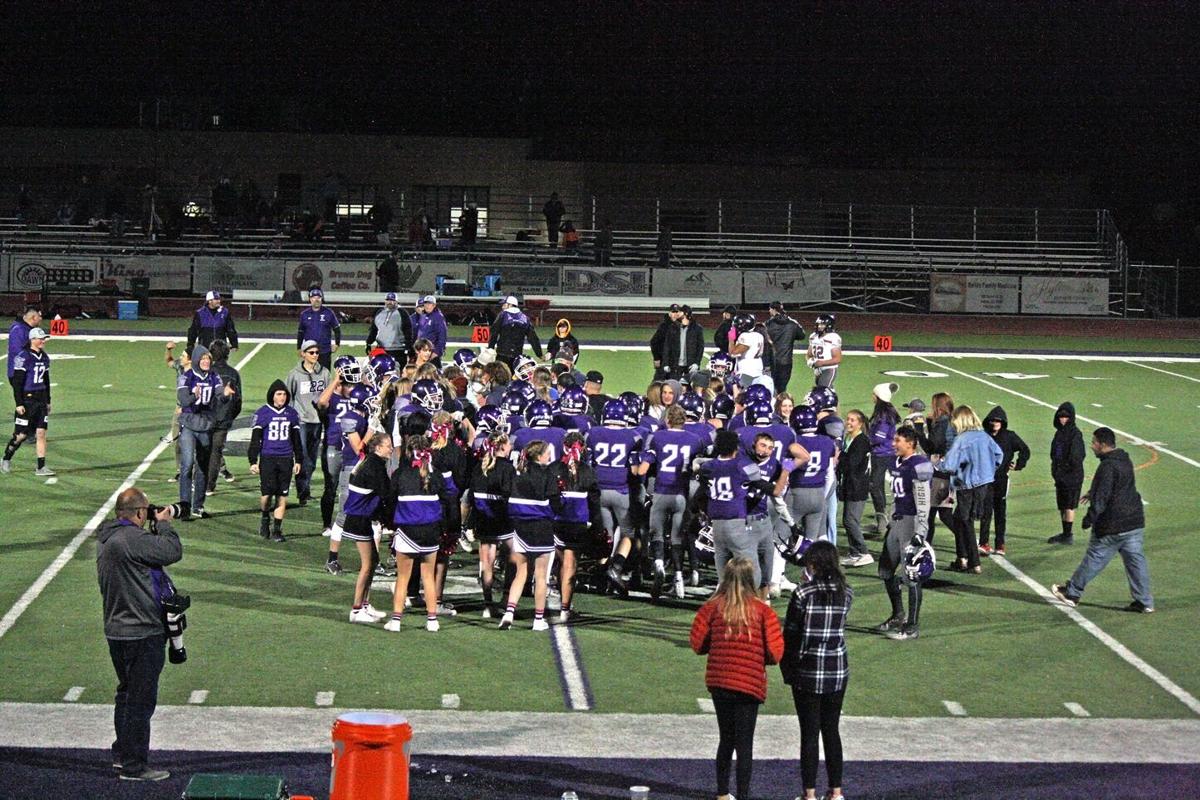 Students and fans rush the field after Salida High School’s only win of the season Friday against Montezuma-Cortez. The team and fans lined up on the sideline and sang the school fight song along with fans still in the bleachers.

Salida High School sophomore Caiven Lake hands off to senior Brewer Matthews Friday in the Spartans’ win over Montezuma-Cortez. It was Salida’s last game of the season.

Students and fans rush the field after Salida High School’s only win of the season Friday against Montezuma-Cortez. The team and fans lined up on the sideline and sang the school fight song along with fans still in the bleachers.

With less than 40 seconds left on the clock Friday, Salida High School sophomore quarterback Caiven Lake connected with senior receiver Braden Collins in the end zone to tie the game against the Montezuma-Cortez Panthers at 34-34. Collins then ran the ball in for the 2-point conversion for Spartan football’s first win of the season.

“They found a way to win,” coach Matt Luttrell said. “We had great effort from the guys on the sidelines to the starters on the field. There was great leadership from Collins. I couldn’t be more proud of our seniors. Tonight was very special, and I’m extremely proud.”

The game started off tough for the Spartans, as the Panthers took three turnovers away with two fumbles and one interception and scored twice in the first quarter to go up 14-0.

Collins came in to replace Lake at quarterback, and after a big catch and run from Collins to senior Elijah Wyble, the Spartans scored with 1 minute, 29 seconds left in the first to close the quarter at 14-6 after a missed 2-point conversion by Salida.

Montezuma-Cortez took the kick-off and marched down the field to score at 10:06 in the second quarter, going up 21-6.

After the Spartan offense turned the ball over on downs, the defense stepped up and forced the Panthers to punt.

The Spartans took the ball on their 40-yard line and marched down the field to score on a pitch from Collins to senior Braden Martellaro. After a failed 2-point conversion, the Spartans trailed 21-12.

The Salida defense continued to turn up the heat, forcing the Panthers to punt from fourth and 20.

Lake came back in at quarterback and, after he connected with Collins on an almost 30-yard catch and run to the 2-yard line, the Spartans punched it into the end zone and made their 2-point conversion to close the score to 21-20 with just under two minutes left in the first half.

After halftime, the two teams took turns moving up and down the field, but nobody was able to turn it into anything until Salida managed to score, making the 2-point conversion to take the lead for the first time in the game, 28-21, with 45 seconds left in the third quarter.

The Salida defense forced the Panthers to punt, but the Spartans fumbled the ball away two plays later, which allowed Montezuma-Cortez to move down the field and tie the score 28-28 with 7:03 left in the fourth quarter.

After kicking off to Salida, the Panthers picked off Lake and returned the ball to the 12-yard line before putting it into the end zone.

A personal foul after the touchdown by the Panthers pushed the extra-point attempt back 15 yards, and they missed the extra point.

After the kickoff went out of bounds, the Spartans took over on their own 35, moving the ball down the field before the touchdown and 2-point conversion in the final seconds for the win.

“I told the team before the game that no one will really remember the score, but they will always remember the battle when they played for their brother. Each player did exactly that and found a way to win the game.

“Collins has played with his full heart in each game, and what better ending then putting the ball in his hands to do it.

“All the juniors and sophomores elevated their play to play for their brothers. I’m extremely proud of all of all of them.”