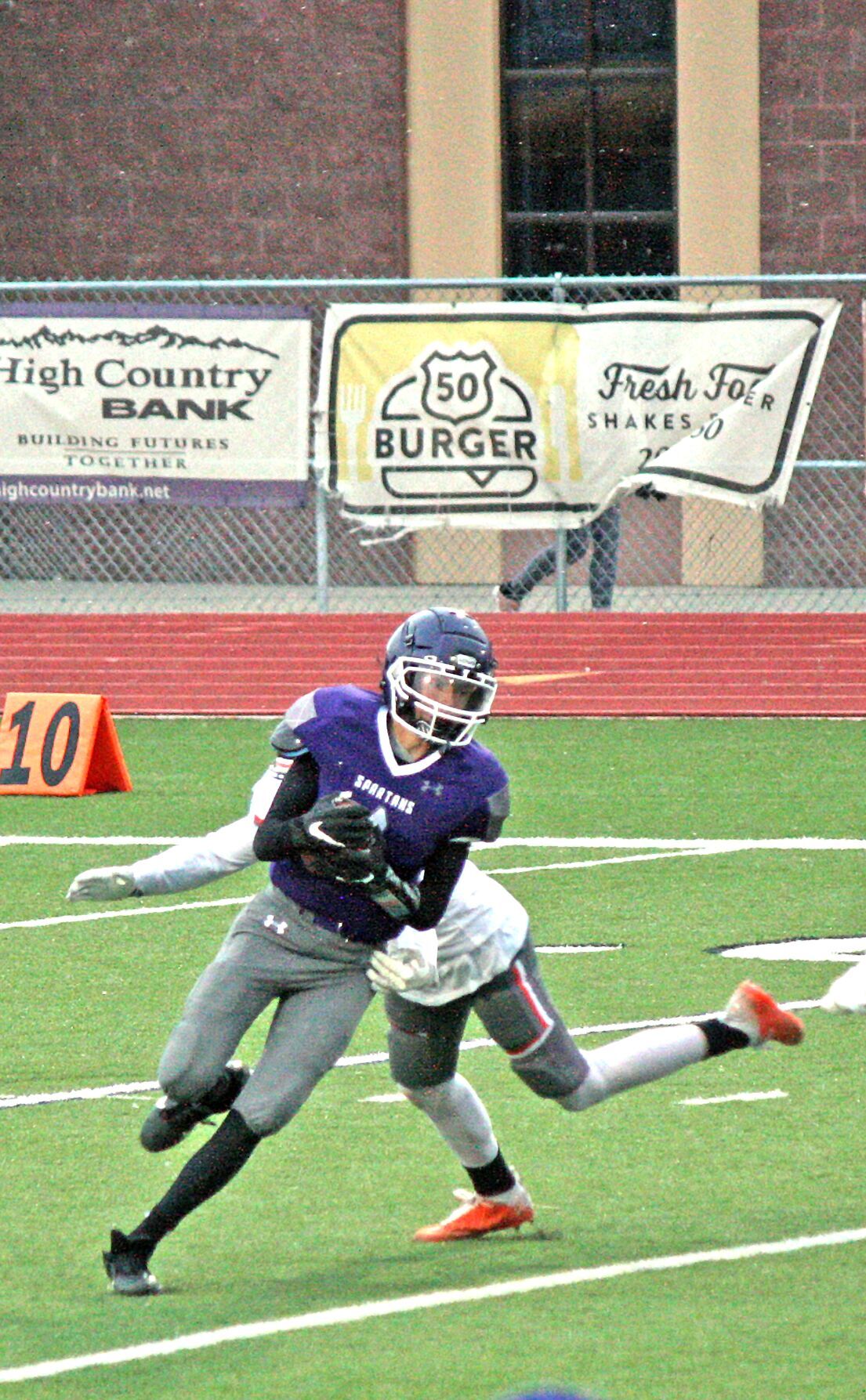 Junior Braden Martellaro escapes a tackle Friday by a Montizuma-Cortez defender. Salida scored their second touchdown of the season during the game. 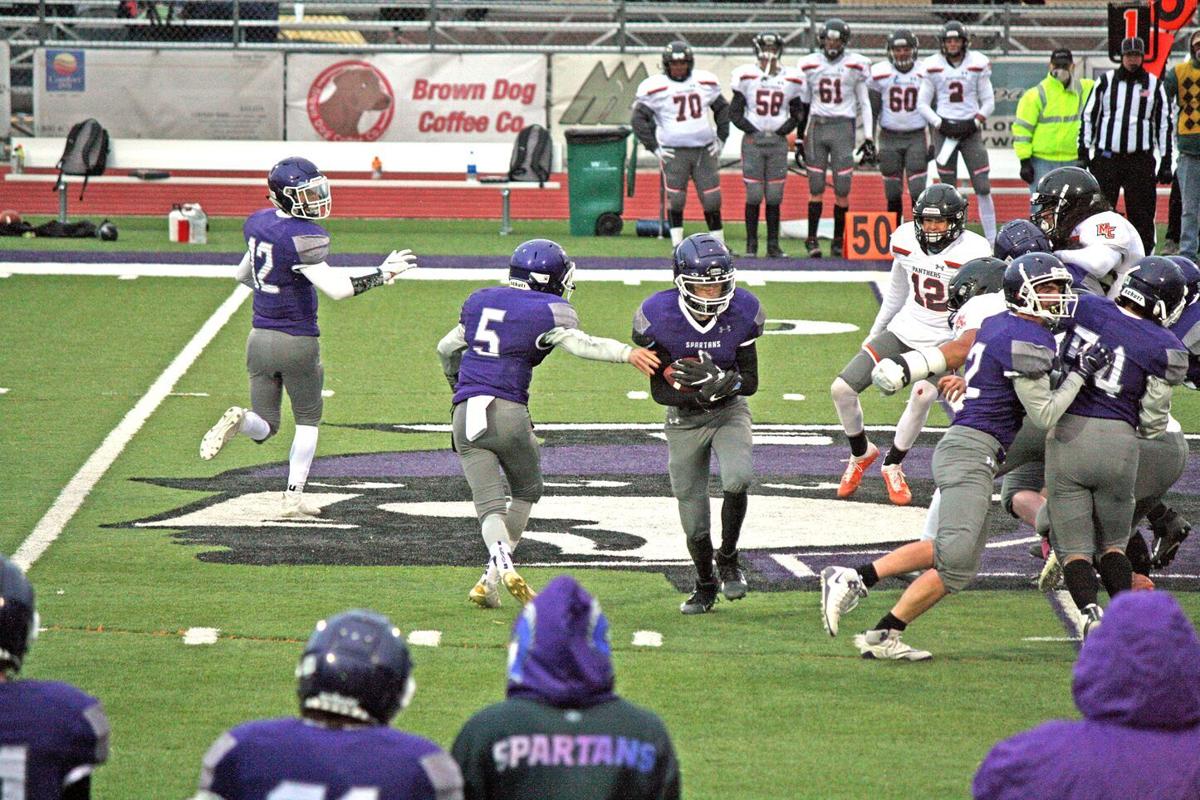 Freshman Caiven Lake, No. 5, hands off to junior Braden Martellaro as junior Brewer Matthews, No. 7, fakes the opposite direction. Salida lost 42-6 Friday to Montizuma-Cortez.

Junior Braden Martellaro escapes a tackle Friday by a Montizuma-Cortez defender. Salida scored their second touchdown of the season during the game.

Freshman Caiven Lake, No. 5, hands off to junior Braden Martellaro as junior Brewer Matthews, No. 7, fakes the opposite direction. Salida lost 42-6 Friday to Montizuma-Cortez.

Although the Spartan football team lost 42-6 Friday at home against the Montezuma-Cortez Panthers, coach Matt Luttrell said the second half of the game was the best football Salida High School has played all year, with junior Brewer Matthews scoring the team’s second touchdown of the season.

“We are getting better every week,” Luttrell said. “The first half we kind of had a hang-over from the Rifle loss, but we really came back and played tough in the second half. Strength-wise, we are a good team, we just lack the experience, which is why each week, we are getting better.”

Salida’s offense got off to a rough start, but their defense kept them competitive.

After receiving the kick-off, Salida fumbled on their third play. Cold, wet and snowy conditions may have contributed to the Spartan’s three fumbles of the night, all of which resulted in turnovers.

Montezuma-Cortez scored their first touchdown 4:10 into the first quarter, but the Salida defense stopped their two point conversion.

About two minutes left in the first quarter, the Panthers scored again, converting for two this time, to lead 14-0.

Montezuma-Cortez scored again 9:02 in to the second quarter, and again Salida stopped their two point conversion for a score of 20-0.

After Salida punted, the Panther offense drove down into the red-zone, but the Salida defense came up with the big stop.

A couple of plays later, however, freshman quarterback Caiven Lake fumbled the longsnap and Montezuma-Cortez recovered on the four yard line.

They quickly drove it in and made the two point conversion, making it 28-0.

With 10 seconds on the clock before the half, the Panthers passed on a broken play and scrambled up the field, with the clock running out, but Montazuma-Cortez was able to get into the end zone.

The Spartans stopped their two point conversion leaving the score 34-0.

“I told the boys at halftime to just forget what has happened so far, and think of it as a new game, go out with a 0-0 scoreboard,” Luttrell said. “We had a game plan built around (junior) Braden Martellaro, but he went down a shot to the hip, so we had make some changes.”

Luttrell said junior Brewer Matthews stepped up and put down more than 100 yards rushing and receiving.

“We’ve been trying to get that out of him all season,” Luttrell said.

Matthews also scored the Spartans second touchdown of the season, about 6:30 into the third quarter, after Salida marched it down the field.

Their two point conversion was stopped.

Montazuma-Cortez scored once more just before the end of the third quarter, after Salida’s third fumble of the game, and made their two point conversion, for a final score of 42-6.

“(Senior) Raymond Clinton had his best game of the season, and really showed leadership for the line,” Luttrell said. “We’ve been working with using him as a lead blocker for Brewer, and it really worked tonight.”

Luttrell said he was also very proud of how the freshman and sophomores have been stepping up, not just for this game, but all season.

The Spartans are now 0-5, both over all and in the 3A West (Spring) league.

Montezuma-Cortez is 2-3 overall and in league.

The Spartans will be at home 7 p.m. Friday against the undefeated Glenwood Springs Demons.