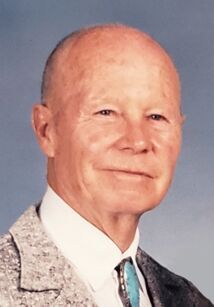 He was born May 31, 1923 in Braggadocia, Missouri to Flora and David Henry Biggs.

He spent his formative years in St. Louis, Missouri and graduated with honors from Blewett High School in 1942.

In school, he participated in the gymnastics and diving teams, earning fourth place for fancy diving in the 1942 state competition.

Mr. Dave would later enlist in the Missouri National Guard and rose to 2nd Battalion Cadet Commander before it was discovered that he was not actually old enough to enlist.

He then served in the Navy for a brief period before enlisting in the Army Air Corps in 1943, receiving his commission in November of the following year.

During this time, March 3, 1944, he married his high school sweetheart and wife of 63 years, Daisy Jane Warfel.

He snuck off base to marry her and had to sneak back on base before it was discovered that he was missing.

Mr. Biggs served at Air Force bases in the United States and overseas and acquired 5,000 hours of flight time.

During his service, he received many medals, among them the Distinguished Flying Cross medal, the Air Force Commendation medal, and a commendation medal from General Chen Chia Shang, Commander and Chief of the Chinese Air Force.

He served in the U.S. Air Force for 30 years and retired as a lieutenant colonel in January of 1971 as the Command Post Director of Headquarters Air Defense Command, at Ent Air Force Base in Colorado Springs.

During his life, he achieved a black belt judo rank of Nidan, was the president of the judo club at the Langley Air Force Base in Virginia, and coached a judo youth club in Colorado Springs.

A top-ranked master and teacher, he was referred to as “sensei” by his students and peers.

He received his bachelor of science degree in psychology from Southern Colorado State College.

He also volunteered with the Civil Air Patrol in Salida and was an elder in his church.

He was also involved with the area’s search and rescue team, the local food bank, and a tax preparation service that provided free taxes for low income individuals.

Throughout his life, he enjoyed spending time with his dogs, and participating in gymnastics, swimming, flying, shooting, riding horses, skiing, fishing, hunting, hiking, rock hounding and anything the outdoors had to offer.

Friends and family said he instilled a respect and appreciation for all of those things in his children, grandchildren, and great-grandchildren.

Mr. and Mrs. Biggs spent their retirement years in Salida and continued their travels around the world.

Mr. Biggs was preceded in death by his wife; and granddaughter Jessica Kori Biggs.

A graveside service will be held at 1 p.m., Aug. 15, 2020 at Fairview Cemetery with Pastor Robert Kippley officiating.

Mr. and Mrs. Biggs’ ashes will be buried together at that time.