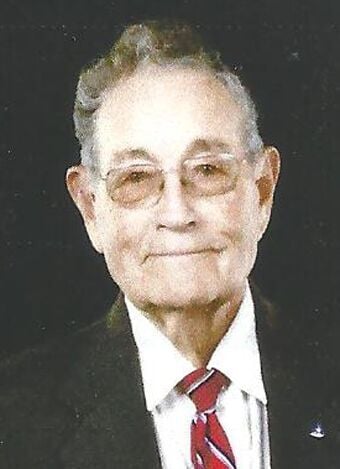 He was born Sept. 4, 1926, in Pueblo to Theodore Isaac Griffith and Ruth Evelyn (Smith) Griffith.

During the Depression, the Griffiths moved to Blanca where his father worked in the icehouse.

It was also one of many jobs Mr. Griffith would work at during his time of living in Blanca.

His dad was also the town marshal. While others were out of work, his dad always had work available in which he enlisted him and his brother Ted to help.

He graduated in 1944, from Blanca High School as valedictorian of his class.

Soon after, he enlisted in the U.S. Army and was sent to Fort Leavenworth for a week of preparation then on to Fort Walters in Texas for basic training.

From there, he went on to Fort Bragg, North Carolina, for parachute school where he learned to pack a chute and be ready to go.

He told friends and family that the first jump “scared the hell out of him.”

He was then sent to Sendai Honshu Province in Japan where he was in the 11th Airborne working in the mail department. Being in the mail room did not keep him from jumping however as paratroopers had to jump at least once a year.

He returned to the States two years later and was honorably discharged in San Francisco.

From there, he went back to Pueblo and ultimately back to Blanca where he worked on the family ranch raising cows.

Mr. Griffith went on to Fort Collins to go to college on the GI Bill.

He then went back to Pueblo to help family and started to work at the Colorado Fuel and Iron Company.

It was only supposed to be temporary but he ended up working in the coke plant as a chemist for 17 years.

He met Elsie Simonich at CF&I and they were married Feb. 3, 1951. They had two daughters, Julie and Susanne.

The couple was married 67 years when Mrs. Griffith died in 2018.

The Griffiths moved to Salida in 1966 and bought the Shawano Motel (now Loyal Duke’s Lodge) on U.S. 50.

It was one of the first hotels to have a covered swimming pool and color TVs. They operated the motel for nine years.

In July 1975, they wanted to take the girls for a picnic and drove to the Boys Market at 11 a.m. to get chicken, but they were already sold out.

Mr. Griffith said, “What this town needs is a Kentucky Fried Chicken.” In 1976 the Griffiths opened the first fast food restaurant in Chaffee County and operated the KFC for 24 years which friends and family said they really enjoyed.

In 1990 they built a new store with a drive-thru (now Pueblo Bank and Trust).

Mr. Griffith was an entrepreneur. He would come up with new products and he put in the buffet and also Taco Bell.

Friends and family said he prided himself on running a clean and good restaurant.

Mr. Griffith was a Mason for 50 years and held several degrees. He was also a member of the Veterans of Foreign Wars.

An avid hunter, fisherman and pilot, he and his family took several trips around Colorado and California.

In his later years, he and his wife would go salmon fishing up in Alaska.

Mr. Griffith was preceded in death by his parents; a brother; and  wife.

In lieu of flowers, memorial contributions can be made to the Mason Lodge No. 57 and the VFW through Lewis and Glenn Funeral Home.

Arrangements were with Lewis and Glenn Funeral Home.

Online condolences may be offered to the family at www.lewisandglenn.com.