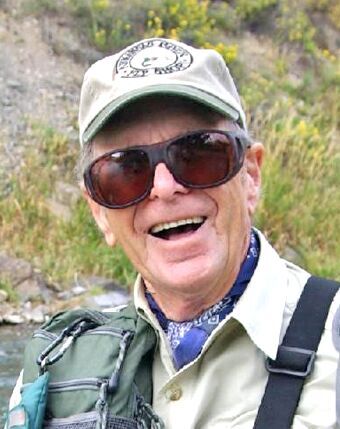 He was born Sept. 2, 1928, in Kenosha, Wisconsin, to David and Mildred “Fern” Puterbaugh, the eldest of four boys.

He lived most of his life in Colorado Springs and Salida.

He was a veteran of the United States Navy, having served his country from 1946 until 1950.

He later worked at the United States Air Force Academy as an engineering technician.

Mr. Puterbaugh and his wife Polly retired to Salida in 1984.

His lifelong passion was tying flies and fly fishing.

Friends and family said he was a highly regarded fishing guide and fly tyer.

Mr. Puterbaugh was equally passionate about imparting his knowledge of fly fishing and fly tying to anyone he met and he taught thousands of people how to fly fish over a 50 year career in the fly fishing industry.

An accomplished artist, he specialized in watercolor painting, scrimshaw, pen and ink drawing, and knife making.

Mr. Puterbaugh was a pioneer in fly tying.

He co-authored the “Basic Manual of Fly Tying,” along with three other books on fly fishing and fly tying.

He created many fly patterns that are widely known and used by anglers all around the world. Chief among them is Puterbaugh’s Black Foam Caddis.

Friends and family said he was a kind, gentle and caring man, always wanting to make people laugh.

They said his sense of humor kept him healthy and was a significant factor in his longevity and he was putting people at ease with his jokes until he passed. They said his character and wit will be missed.

Friends and family said resuming the practice of his Catholic faith later in life was the pinnacle of a life well lived.

They said he once asked a Catholic priest if there was a trout stream in heaven and now he now knows the answer to his question.

He was preceded in death by his step-son Frankie.

Arrangements were with Lewis and Glenn Funeral home.