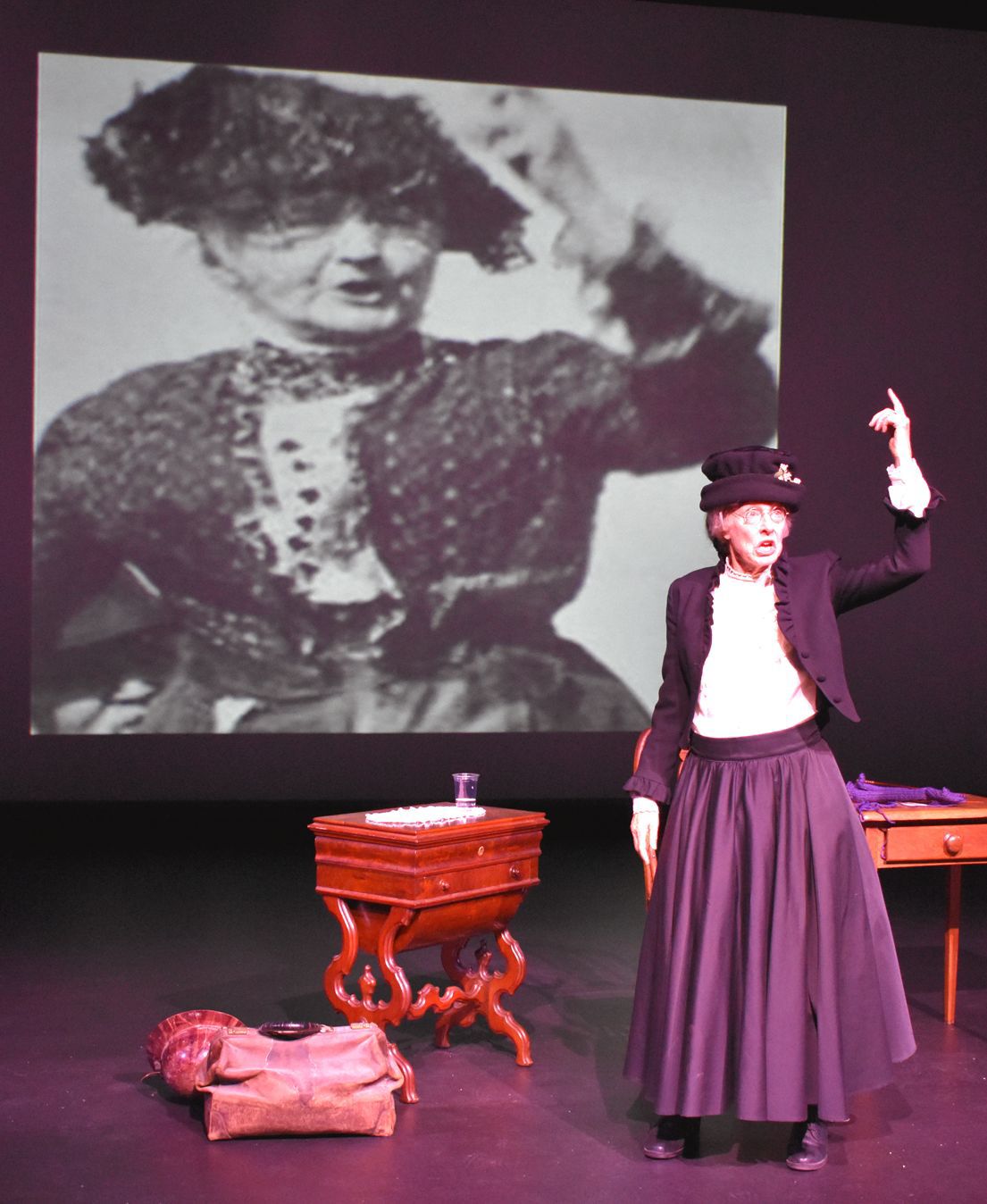 Jan Justis mirrors a projection of Mary Harris “Mother” Jones during a rehearsal of “Mother: The life of ‘Mother’ Jones” at Salida SteamPlant. The one-woman show tells the story of the Irish school teacher turned union organizer. 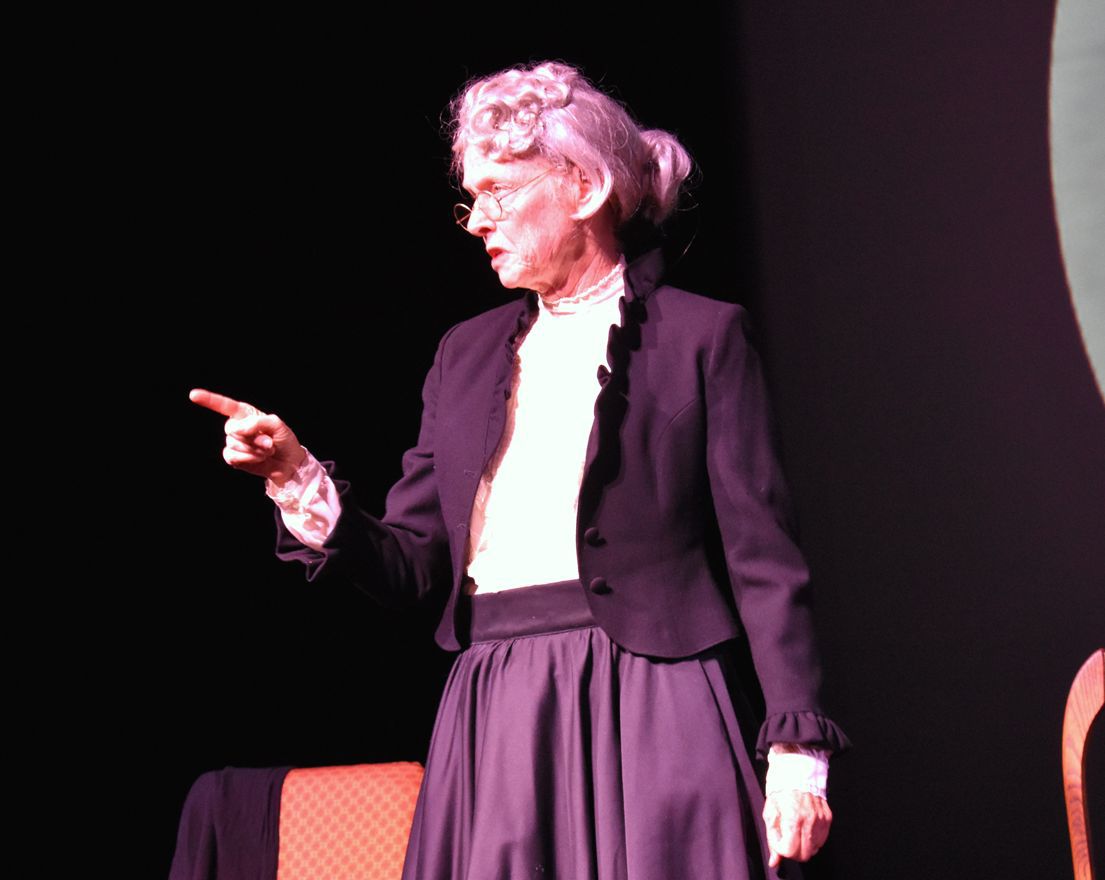 Jan Justis, as Mother Jones, “gives them hell” in the one woman show, “Mother: The life of ‘Mother’ Jones,” at Salida SteamPlant. The show will be presented to a small audience Friday and will be available via streaming after the weekend.

Jan Justis mirrors a projection of Mary Harris “Mother” Jones during a rehearsal of “Mother: The life of ‘Mother’ Jones” at Salida SteamPlant. The one-woman show tells the story of the Irish school teacher turned union organizer.

Jan Justis, as Mother Jones, “gives them hell” in the one woman show, “Mother: The life of ‘Mother’ Jones,” at Salida SteamPlant. The show will be presented to a small audience Friday and will be available via streaming after the weekend.

Colorado TINTS (Theater in Non-Traditional Spaces) production of “Mother: The life of ‘Mother’ Jones” is a peek into the life and motivations behind the fiery union organizer once called the “most dangerous woman in America.”

Local actress Jan Justis stars in the one-woman show that takes the audience through Jones’s life from her birth in Cork, Ireland, her marriage and motherhood, cut short by a yellow fever epidemic in Memphis, Tennessee, through the Chicago fire of 1871 and her reinvention of herself as a union organizer and proponent of worker rights and the abolition of child labor including her participation in the 1886 Haymarket Riot, 1903 March of the Mill Children to Colorado’s 1914 Ludlow Massacre.

Projected images illustrate events and people as Justis tells Jones’ story, in part with Jones’ own words from speeches she made while campaigning for better working and living conditions for workers, including the eight hour work day.

The story begins in the basement of the Huerfano County Jail where Jones was incarcerated in 1913 for her participation in the Colorado Coalfield War as an organizer for the United Mine Workers.

The timeline shifts to Jones; early life and follows the progression of her personal losses and eventual advocacy for workers rights.

The story culminates with a meeting with J.D. Rockefeller Jr. following the Ludlow Massacre which set the stage for reforms in child labor laws and the eight hour day among others.

Justis portrays the feisty Irish woman in her different stages of life and embodies Jones’ passion in her cause for “her boys.”

The play was written by Mike Broemmel and Jennifer Dempsey.

Dempsey, also the director of the show, said she came by the story of Mother Jones while doing research for a show about the Ludlow Massacre she had in mind.

“She was a central figure in the reforms made after Ludlow,” she said.

“How Mother Jones is not well known and not part of our collective consciousness is beyond me,” Dempsey said.

Dempsey said she and Broemmel started working on the play in September of 2018, and as they worked on the show the parallels to the present day climate were uncanny.

The hardest part of creating the show was the amount of material they had to cut out because there was so much to work with.

Justis, did her own research on her character.

She said she decided to take on the role because. “I believe we all do things because of where we’ve come from in life.”

She said it was as if after losing her family and then losing everything else in the Great Chicago Fire, Jones had nothing else to lose.

The treatment of the workers by the elite “pains her and it made sense to me that endeavors to take on this cause and see it thorough,” Justis said.

There will be one performance at this time at 7 p.m. Friday at Salida SteamPlant, 220 W. Sackett Ave. The show runs about an hour and a half and there is one intermission.

Tickets cost $25, and can be purchased at eventbrite.com/e/mother-rescheduled-tickets-111002322936 however the audience is limited to 30 people under COVID-19 restrictions.

Demspey said when the world opens back up they hope to take the show on tour around the state.

The show is also being recorded and is expected be available to view on Monday via the Salida SteamPlant website at salidasteamplant.com, Colorado TINTS website at coloradotints.com or on the Colorado TINTS Facebook page.