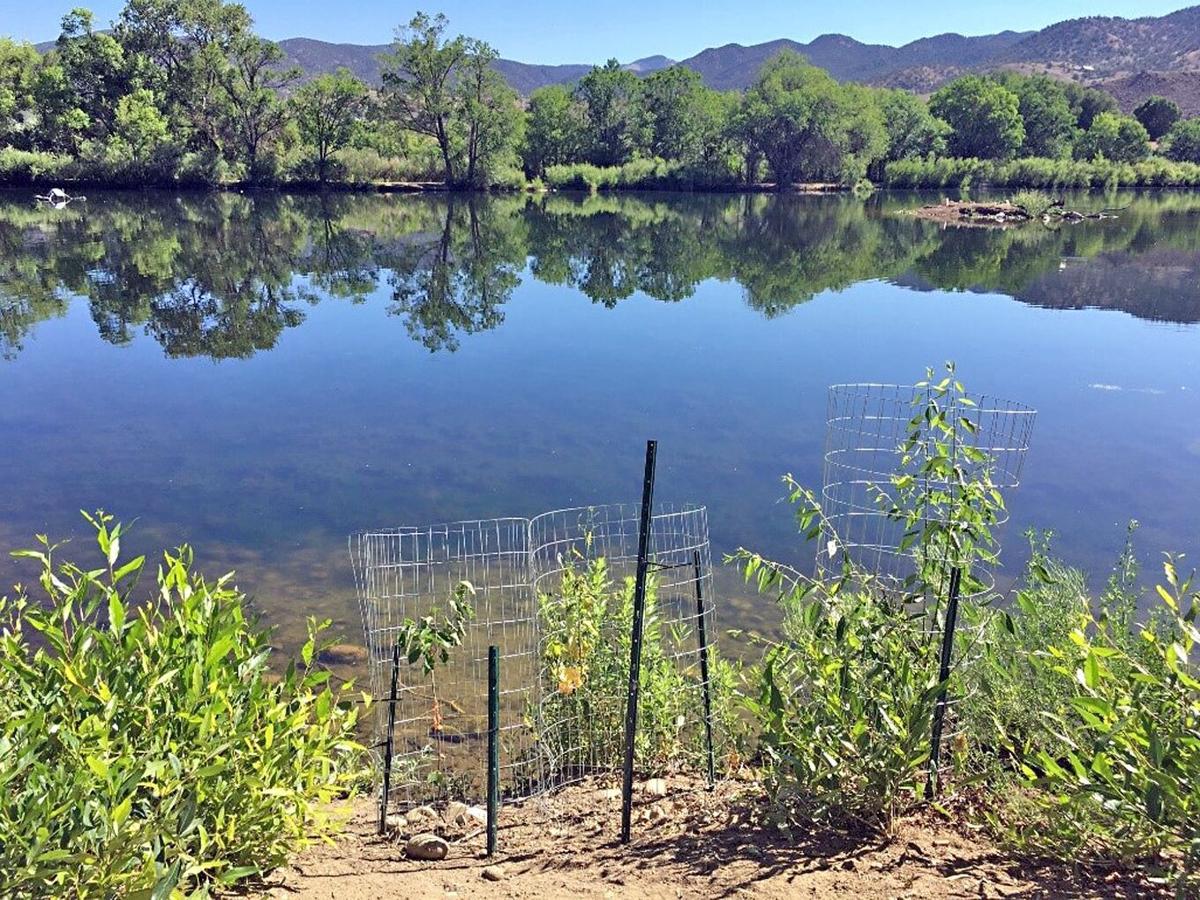 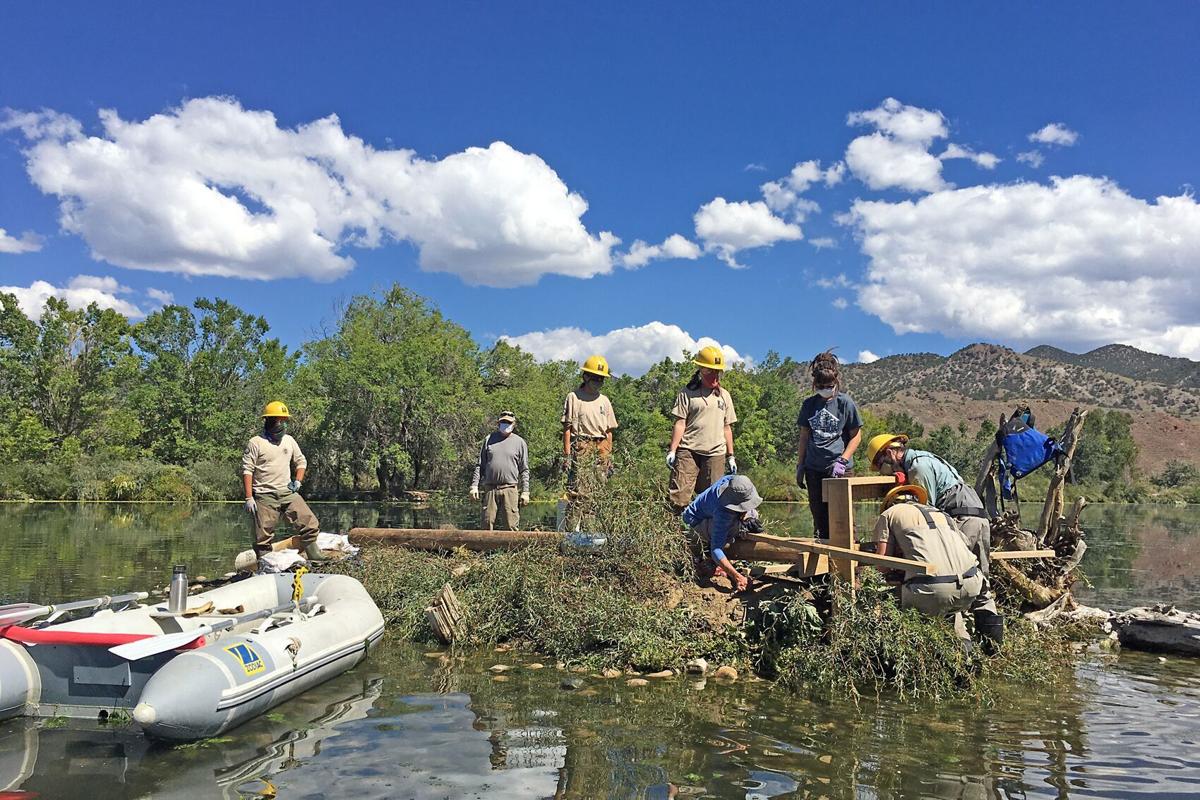 Volunteers help build a nesting platform for osprey at Sands Lake recently. The platform now stands tall on the island in the middle of the lake.

Volunteers help build a nesting platform for osprey at Sands Lake recently. The platform now stands tall on the island in the middle of the lake.

The Central Colorado Conservancy made significant progress on a collaborative restoration project at the Sands Lake State Wildlife Area in 2020.

In partnership with Colorado Parks and Wildlife and the Colorado Department of Public Health and Environment, the conservancy worked to improve the wetland habitat at the lake.

Invasive species were removed, native trees, shrubs, flowers and grasses were planted in their place.

Fences were mended, trails repaired and some paths to the lake that weren’t supposed to be there were closed.

They also worked to reduce erosion on the riverbanks and protect trees from beavers.

Central Colorado Conservancy executive director Adam Beh said the conservancy was interested in showing that a local land trust can work with local partners on public places in a way that would enhance the area for all users.

The conservancy said the lake and trails at Sands Lake are enjoyed by an estimated 7,000-10,000 people every year and that visitors of all kinds enjoy the area for fishing, birding, wildlife watching and walking.

Conservancy Watershed Restoration Specialist Buffy Lenth acted as lead on the project and started working on it at the beginning of July.

“Sands Lake is a local hot spot for both wildlife and people,” Lenth said. “It’s been rewarding, especially during the pandemic, to see all of the progress we have made working safely with Habitat for Humanity volunteers and youth crews to enhance wildlife habitat at Sands Lake and build its resilience to the very high visitor use it experiences.

“Let’s all hope that we can entice a pair of osprey to nest out on the island next year and add to the great watchable wildlife opportunities at Sands Lake.”

Working to restore the local osprey habitat at Sands Lake was a main focal point of the project in 2020.

Lenth and her team worked with a Southwest Conservation Corps youth crew at Sands Lake for a week in June and a week in September and got several tasks accomplished to enhance wildlife habitat.

One task was to install an osprey nesting platform on the island at Sands Lake.

They used a power pole donated by Sangre de Cristo Electric and worked with a local Habitat for Humanity group of volunteers to build the nesting platform.

To make this possible, they borrowed a boat from Colorado Parks and Wildlife to transport the pole, nesting platform, crew members, volunteers and eight bags of Quickrete out to the island.

“The work the Conservancy has led at Sands Lake is not only about a positive wildlife habitat restoration project at a State Wildlife Area, it also serves as an opportunity to help a local conservancy deliver community education and outreach stories on wetland conservation matters, and doing so in a public area so close to town that it serves a large percentage of this community,” Beh said.

“In addition to continued collaboration with Colorado Parks and Wildlife, we are also thrilled to have implemented this project with our new state partner, Colorado Department of Health and Environment.

“Without funding from CDPHE, this project would not have had the needed momentum for completion. We look forward to continued partnership on collaborative conservation efforts here at home.”

Beh said the state’s department of public health and environment manages a lot of the superfund money that comes through and manages the disbursement of that money through restoration projects and projects focused on water, among other things.

He said the department provided approximately $25,000 for the project, which will be spread out over a couple years to help the conservancy monitor the area and their work in the future.

Beh said the conservancy has contributed at least another $5,000-$7,000 of both in-kind work and money into the project, which includes paying Lenth’s time and the Southwest Conservation Corps’ time as well as covering some materials.

He said the Southwest Conservation Corps and local Habitat for Humanity volunteers were really important this year due to the restrictions of the COVID-19 pandemic that made the Conservancy unable to host its normal member volunteer workdays at Sands Lake.

“The Sands Lake Project is great example of how to develop and implement a conservation/restoration project successfully: with great leadership, professional collaboration, and community participation,” said Kayla Malone, Chaffee County Noxious Weed Program Supervisor. “I look forward to seeing the area grow, mature and bloom to support an even greater range of wildlife in the future.”

One invasive species removed from Sands Lake were Russian olive trees, which Beh called “a huge draw on the system.”

Willows and other plants, meanwhile, were planted with the aim of increasing the biodiversity.

The Conservancy hopes to continue their hands-on stewardship activities at Sands Lake in the spring while it also monitors the efficacy if this year’s work..

For more information on the project and how to get involved, visit www.centralcoloradoconservancy.org