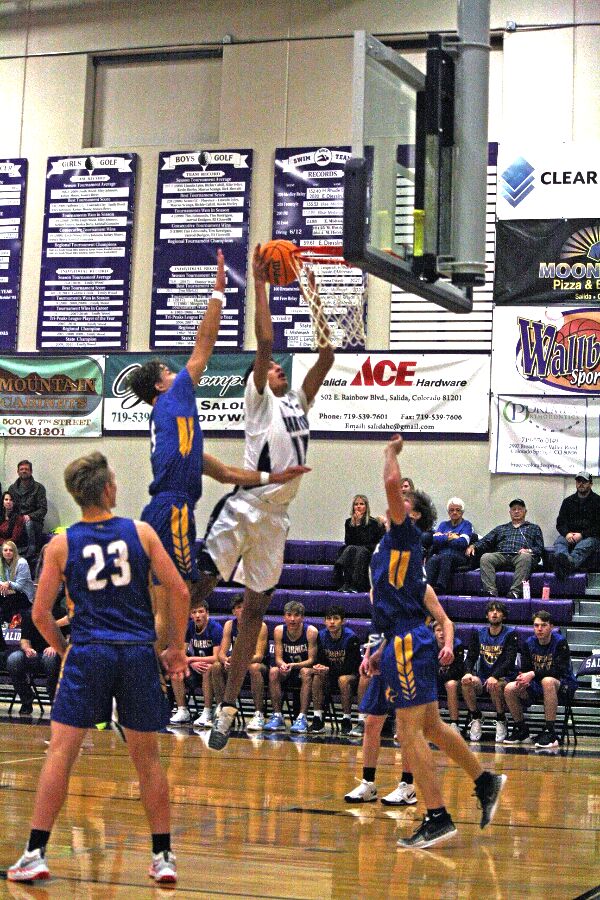 Salida High School junior Tristan Jackson elevates over the Florence defense Wednesday, as the Spartans beat the Huskies 72-41 at home. Jackson led the team with 25 points. 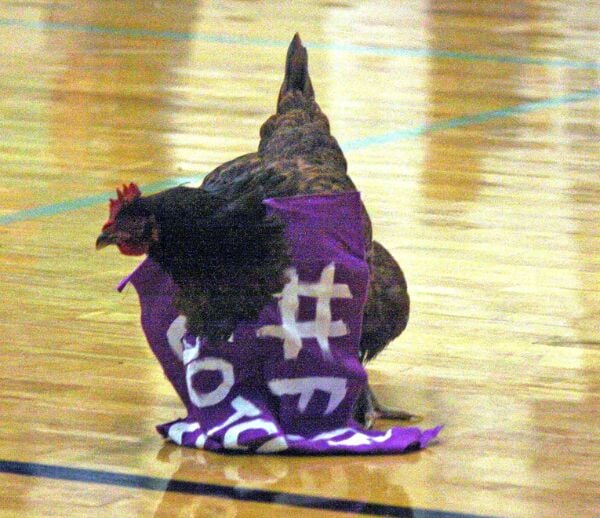 Shortly after halftime of the Salida Spartans-Florence Huskies game, someone tossed a chicken through the main doors of the SHS gym onto the basketball court. Athletic director Marko Hahn said the school will be looking into the prank.

Salida High School junior Tristan Jackson elevates over the Florence defense Wednesday, as the Spartans beat the Huskies 72-41 at home. Jackson led the team with 25 points.

Shortly after halftime of the Salida Spartans-Florence Huskies game, someone tossed a chicken through the main doors of the SHS gym onto the basketball court. Athletic director Marko Hahn said the school will be looking into the prank.

The Salida High School boys’ basketball team’s 72-41 victory over the Florence Huskies Wednesday night at home had it all: big plays, a slam dunk and a player vomiting on the court.

And there was a chicken as well.

The Spartans started strong, leading the Huskies 11-3, before Florence battled back to almost tie Salida at the end of the first quarter, 20-19. That was the closest Florence would come to taking a lead.

“Our defense wasn’t as good as it could be in the first quarter,” coach Adam Christensen said. “We started playing better after that and held them to only 3 points in the fourth.”

By halftime the Spartans were up 40-26, outscoring the Huskies 20-7 in the second quarter.

There was about a 10- to 15-minute break during the second period to clean up the court after a Salida player vomited near their bench.

The Spartans continued their domination in the third, putting up 19 points to Florence’s 12, to lead 59-38 at the end of the third quarter.

One of the strong points for the Spartans was their two big men, juniors Nate Yeakley and Tristan Jackson, dominating the boards.

Jackson put up 25 points, including dunking the ball off an offensive rebound in the third quarter. He had four blocks, five steals and 11 rebounds.

“Our big guys played well,” Christensen said. “This was Nate’s first 20-point game, and I don’t expect it to be his last.”

Also leading the offensive charge were seniors Aaron Morgan and Braden Collins, who scored 8 points each.

The Spartans put up some bombs from the outside as well, with senior Damon Redfeather shooting four 3-pointers, Collins three and junior Aiden Hadley two.

“There is still some stuff we have to work on, but it’s a long season,” Christensen said. “We had a lot of work to do, but hopefully we will get everything running smoothly by the time playoffs start.”

Saturday’s game against Lake County has been canceled due to COVID-19.

Salida will be at home again Thursday against James Irwin (2-4, 0-3) for league play, with the varsity starting at 7:30 p.m.

And about that chicken: Just after halftime started, someone threw a live chicken through the main doors of the gym, where it landed on the court. It was picked up and taken away with no problems.

Athletic director Marko Hahn said the school will be looking into the incident.

Community Christmas – Salida serves 480 meals to anyone who wanted one