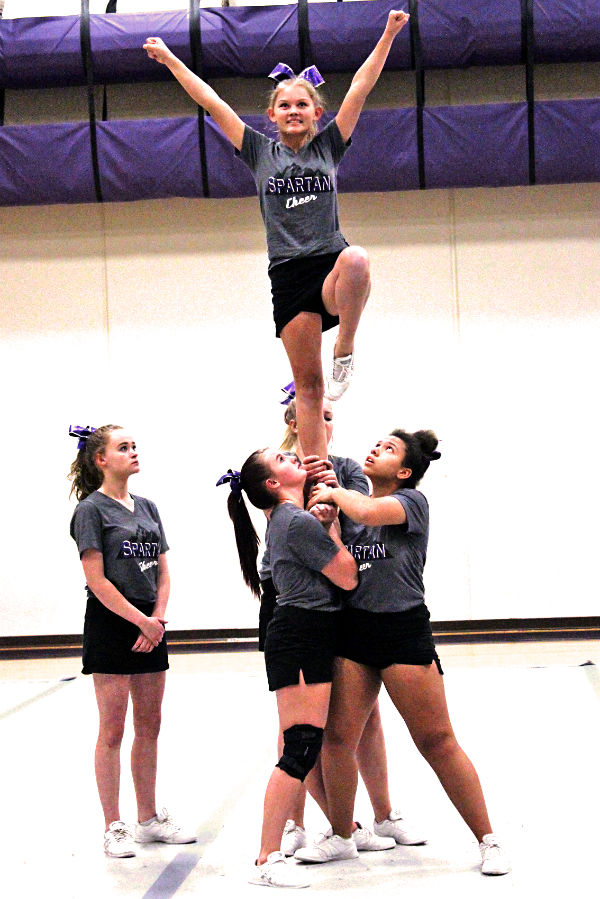 Shaylynn Gallegos balances on one foot while her teammates hold her up at practice on Monday. Also pictured, from left, are Makayla Santucci, Alexia Wilkins, Shannon Hall and Jayanah Berry.

Shaylynn Gallegos balances on one foot while her teammates hold her up at practice on Monday. Also pictured, from left, are Makayla Santucci, Alexia Wilkins, Shannon Hall and Jayanah Berry.

In the past, Salida High School’s competitive spirit team would compete at its league meet and then state.

This season, the team upped its schedule and competed an additional three times while also participating in a showcase event before its league meet.

“For me, I feel they work really hard on their routine and they don’t get to show it off enough,” said co-head coach Sarah Evans. “Essentially, now they get more feedback. I think it’s been super helpful and we’ve learned a lot. It’s also been an opportunity to see other teams and see what they’re doing.”

At the league meet Nov. 16 at James Irwin Charter School, Salida finished second of four teams in the coed competition.

With only one shot to stick their routine, the extra competitions helped Salida shake some nerves, get used to laying it all on the line and make the most of the 2½ minutes they get to impress the judges.

“I think it was really helpful, getting critiques on things we didn’t think of, ” junior captain Jayanah Berry said. “It was stuff we didn’t know, but getting opinions and input really helped us and made our routine solid.”

“It’s a lot easier to practice that in real time,” added senior captain Sophie Lee. “It most definitely helped stage-fright-wise.”

On Friday, Salida will compete with 13 other teams in the 2A/3A coed cheer division at the state championships in Denver.

The top four will advance to the finals on Saturday. Salida has put in the work, practicing at 5:30 a.m. in addition to competing and cheering on sidelines of games. Now, the team has one chance to show the judges what they can do.

“The ultimate goal is to make it to the finals on Saturday,” Evans said. “My main goal is to beat our score sheets from previous competitions, beat teams who finished ahead of us and climb that ladder.”

“Personally, my goal is to have fun and have a good experience with my team,” Lee said. “It’s not all about winning; it’s about the experience and having fun.”