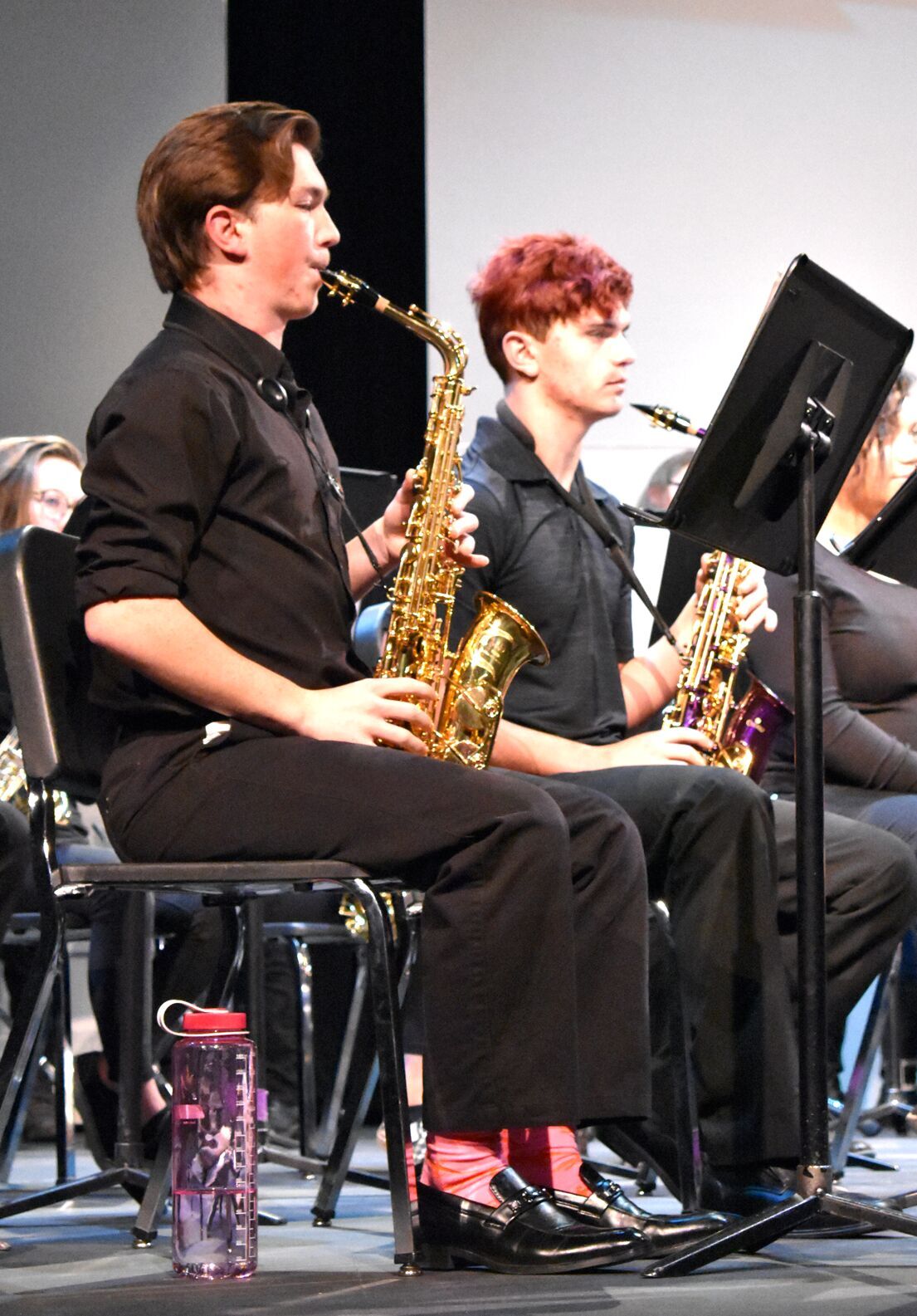 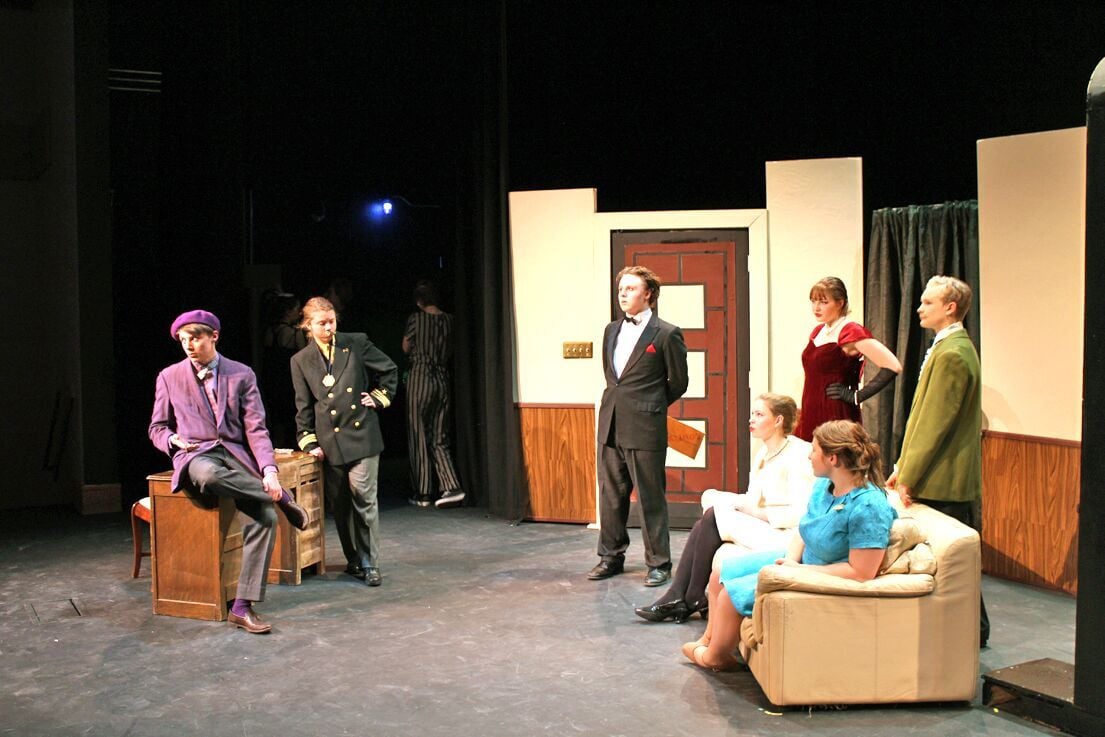 Salida High School drama team rehearses a scene from “Clue” in March. The live performance of the play was cancelled due to COVID-19. The drama team has been exploring new ways to perform under the restrictions posed by the pandemic. From left are Wyatt Velharticky, Lori Cassidy, Vander Ritchie, Maya Vallevona (on couch), Dulce Trujillo, Jessie Rollins (on couch) and Jasper Coen.

Salida High School drama team rehearses a scene from “Clue” in March. The live performance of the play was cancelled due to COVID-19. The drama team has been exploring new ways to perform under the restrictions posed by the pandemic. From left are Wyatt Velharticky, Lori Cassidy, Vander Ritchie, Maya Vallevona (on couch), Dulce Trujillo, Jessie Rollins (on couch) and Jasper Coen.

It’s been a challenging year for teachers and students, but performing arts at Salida High School have had the extra obstacle of teaching a craft that requires working and performing with others.

Wilkins said last spring, when COVID-19 forced the shut down of in-person education across the district for the last couple of months of school was a struggle.

“A lot of plans were cancelled. It was a real blow to motivation for me and for the students,” Wilkins said.

He gave the example of Maddie Porter, who had made All-state Band, an honor for a high school musician, which was then cancelled due to COVID-19.

“It was frustrating and demoralizing,” he said.

Wilkins said he has 25 singers and 35 instrumental students.

As much as possible during the warm fall weather rehearsals were held outside.

Choir members met in front of the school and were divided into groups of 10-15 students and maintained social distancing and masking.

Jazz and concert bands rehearsed in the stands in the football stadium sitting a safe distance apart from each other.

An outdoor fall concert was planned at the stadium for the fall, but a two week quarantine period quashed that opportunity in October.

Instead of a live performance for audience, both high school bands perform a virtual concert which was recorded and made available online for students and parents to watch.

As the weather has gotten colder, instruction has moved indoors with choir spaced out in the auditorium with custodian Brad Pagni sanitizing the space afterward and bands split into three groups studying music composition when not rehearsing in the gym on a rotating schedule.

Wilkins said this year gives a whole different perspective on how to keep students safe.

He said he hopes his students will become better musicians and better people through this experience and dealing with things they can’t control, being tough and “showing some grit.”

The drama team at SHS worked hard on the spring production of “Clue” which was canceled in March when in-person learning was put on hold due to COVID-19.

“We never got back to doing it in front of an audience,” she said.

“It taught me a lot bout the process. The show is vitally important as part of that process,” she said.

After so much growth and confidence building, not being able to perform for an audience was extraordinarily hard, she said.

The rest of the spring was spent working on a Zoom show, “10 ways to Survive life in a Quarantine,” which students were able to rehearse on Zoom as well.

Kasper said she has as many as 27 students, as performers and doing stage craft.

This fall the club was divided into three groups and while the warm weather lasted they could met outside nearly every day.

Alumni Ryan O’Connor and Sawyer Cliff, home from New York where they were pursuing their own performance educations until COVID-19 hit, have been helping  coach the team along with fellow coach Cat Schleicher.

Fall semester this year has included a dive into film production.

Students were tasked with writing and performing their own short films including storyboards.

“They learned a lot,” Kasper said.

Each group worked at a different pace; however, by the end of the semester, one group had completed filming and others were in various stages.

One group was able to do a stage reading of their script.

However, substituting staged theater for film is not as satisfying, she said.

Kasper said the biggest thing during the COVID-19 pandemic has been providing students with a reason to meet socially and keep learning.

The plan for the spring is to rehearse a collection of short plays by John Cariani, “Love/Sick.”

There are nine scenes, each with two characters, making it easier to socially distance actors on stage and the crew will be masked.

Great piece and I appreciate the creativity and determination of local HS teachers and leaders.