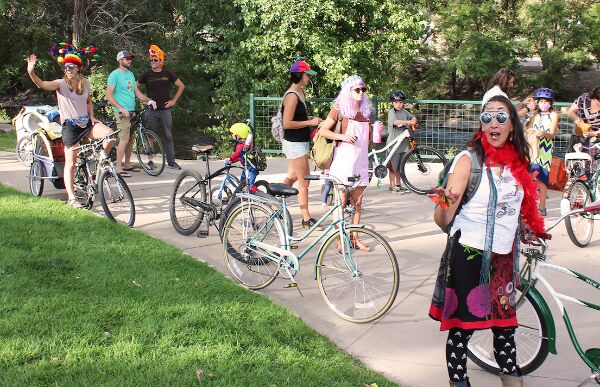 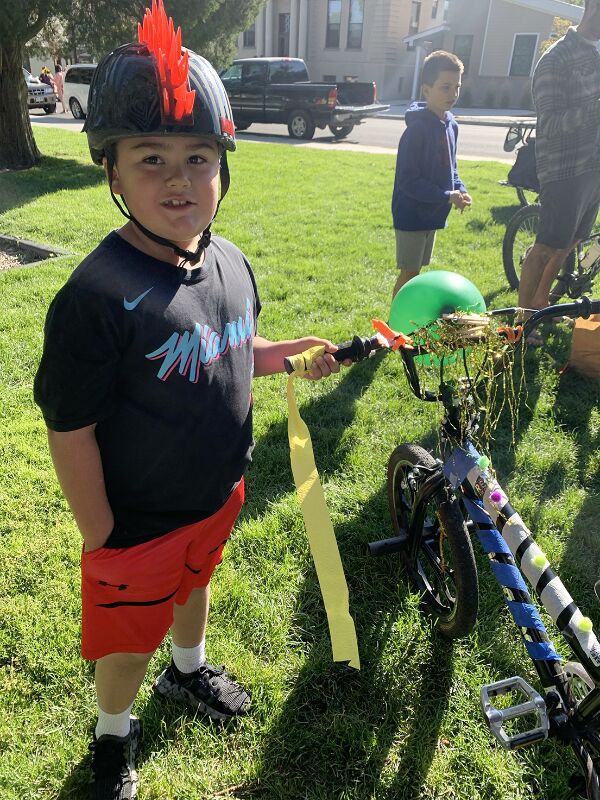 Colby Jackson, 7, of Howard gets snazzy for the Decorated Bike Parade. The city provided materials for kids and families to decorate their bikes for a half-mile, police-escorted parade around the Alpine Park area.

Colby Jackson, 7, of Howard gets snazzy for the Decorated Bike Parade. The city provided materials for kids and families to decorate their bikes for a half-mile, police-escorted parade around the Alpine Park area.

Scores of bike riders – many of them clad in colorful costumes – descended on Salida over the weekend for the annual Salida Bike Festival.

The weekend included hill-climbing endurance rides, a sunset cruise from the river to Alpine Park and a bike decorating event for kids.

“This festival kind of exemplifies Salida,” said Ryan Wiegman, the city’s recreation supervisor. “It has an offering for participants from every level.”

The action started at 5:30 p.m. Friday, with the Absolute Bikes Women’s Group Mountain Bike Ride. Participants met in the parking lot at the north end of F Street.

On Saturday, the Banana Belt Mountain Bike Race got underway at Wilkins Lumber at 5406 U.S. 50, where 100 participants wound their way up steep hillsides along a 28-mile loop on Methodist Mountain trails.

The course, which included 2,850 feet of climbing, took most participants between three and five hours to finish. This year’s winner, Brian Smith, completed the course in just over two hours.

Darin Petty of Woodland Park was the ninth participant to complete the race, with a time of 3 hours, 23 seconds.

“The climb at the beginning is brutal as always,” Petty said. “I really enjoyed the single-track. It’s a great course with amazing mountain views.”

Meanwhile, at Alpine Park, more than 20 youngsters set off on a police-escorted parade through the neighborhood on bikes decorated with balloons, ribbons and tinsel.

“The Banana Belt Bike Race has been going for more than 20 years,” said Tina Scardina, a recreation assistant with the City of Salida.

Now, with events like the children’s bike parade, that love is expanding to the town’s youngsters, Scardina said. “It reflects the community’s love for the mountains and biking,” she said.

On Saturday evening, Janessa and Bill Almquist rode into Salida’s Riverside Park with their 3-year-old daughter, Josie, in tow. All were decked out in colorful costumes for the evening cruiser ride through the city.

“We wanted to come out and support the cause,” Janessa Almquist said.

Participant Katie Tuner said she wanted to participate because it gave her a chance to “go for a bike ride and support the community.”

For her, the cruiser event had an added bonus: “I could dress up and wear a (purple) wig.”

Sunday’s Monarch Crest Crank – the epic ride along a 25-mile stretch of mountain bike trails on the Continental Divide – was expected to bring in more than $20,000 for The Alliance, an organization that assists victims of sexual abuse and domestic violence. The event, which drew more than 100 participants, started at 7:30 a.m. in Salida’s Riverside Park, where a large group of cyclists danced and mingled before heading off in an Absolute Bikes shuttle for the mountaintop.

Afterwards, cyclists returned to Riverside Park where they danced to music provided by The Rusty Lungs Band.

Event organizers posted their thanks to participants on Facebook.

“Too bad nobody had fun today at the Crest Crank,” they joked. “Thanks to all of the amazing riders, sponsors, donors, volunteers and community members that made it a huge success!”