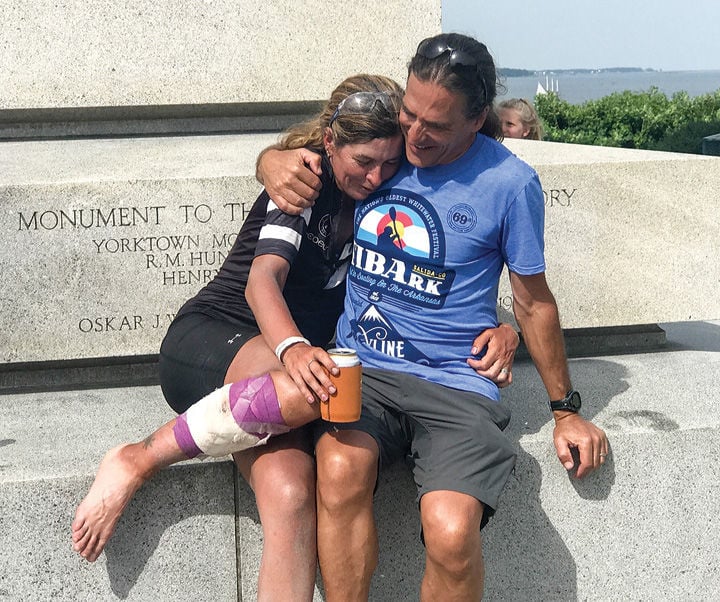 Janie Hayes, left, wraps her arms around husband Jimmy Bisese after completing the Trans Am Bike Race June 22. Hayes was bitten in her right calf and needed a rabies shot during the race. “Had I not gotten it, I would have been worrying the whole time that I was going to start foaming at the mouth and die in the middle of Kentucky,” she said. 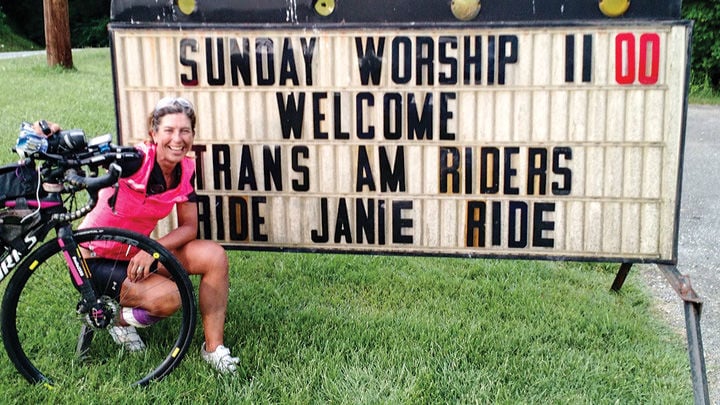 Janie Hayes has her photo taken next to a sign at a church in Radford, Va., that welcomed Trans Am riders as they came through. Hayes completed the Trans Am Bike Race for the second time June 22 and finished in third place.

Janie Hayes, left, wraps her arms around husband Jimmy Bisese after completing the Trans Am Bike Race June 22. Hayes was bitten in her right calf and needed a rabies shot during the race. “Had I not gotten it, I would have been worrying the whole time that I was going to start foaming at the mouth and die in the middle of Kentucky,” she said.

Janie Hayes has her photo taken next to a sign at a church in Radford, Va., that welcomed Trans Am riders as they came through. Hayes completed the Trans Am Bike Race for the second time June 22 and finished in third place.

In 2016 while competing in the Trans Am Bike Race for the first time, Salidan Janie Hayes finished ninth overall, but at one point she said she thought about getting off and going home.

Her competitive drive forced her to “maximize my potential,” and Hayes not only completed that race but signed up to ride again this year.

The race began June 3 in Astoria, Ore., concluded in Yorktown, Va., and passed through 10 states.

“By the time I got to Yorktown there was a big crowd, and it was really nice to pull up to the crowd of people,” Hayes said. “They were with coolers and lawn chairs. I got a Segway escort from a couple of friends. It was a great moment after being out there for so long.”

Four months after completing the race for the first time, Hayes hired coach Greg Grandgeorge to help her prepare for her second run.

Training required a high level of focus, dedication and becoming well acquainted with her bike during the eight months of training.

“(Training) consisted of riding six to seven days every single week, gradually increasing mileage and intensity so the last few months before the race I was probably riding 20-30 hours per week in training,” Hayes said.

“I did rides up to 250 miles at a time just to try to mimic the race without exhausting myself too much in the training.”

Along with improving physically, Hayes said she better understood several elements of the race the second time around: where to stop, where to go to get food, best places to sleep, how long to go before exhaustion set in, etc.

Other variables kept the ride challenging though.

Hayes dropped her phone in the toilet in Walden and had to figure out how to have one shipped to her, many of her electronics died during the event, and she experienced issues with navigation equipment.

Hayes said those were “small experiences” she faced during the race. However, she did face a major mental hurdle.

“One rider was killed (hit by a car) in Kansas about two weeks ago while riding at about 10 p.m. When something like that happens, it puts everything in perspective and you kind of question your motivation, why you’re doing what you’re doing,” Hayes said.

“That was tough for everyone riding. A few people decided to drop out of the race, and some of us continued. It was hard to make that decision.”

Hayes continued to ride but eventually ran into a “large experience” of her own in Pippa Passes, Ky.

A house on the right-hand side of the road had several dogs, one of which was a pit bull, and it bit Hayes in her right calf.

“I was actually riding with rocks in my hand because there are so many dogs around that area. You have to be aware. Dogs run out, you scream at them, you throw rocks at them, you spray water at them and most of them will slink away eventually,” Hayes said.

“This pit bull was so fast. There was no time to think, sprint or throw rocks. Suddenly he latched onto my (right) calf. He hung on for a second, eventually let go, and the owner walked out. (The wound) was pretty deep and bled a lot and into my shoe.”

Hayes said the owner had found the dog just a few days earlier and it did not have its shots. That meant Hayes had to make an unscheduled stop to get a rabies shot. It was a necessary stop, but at the time the fourth-place rider trailed by 100 miles – a distance Hayes said isn’t much.

After stopping to clean the wound at the house of a man and woman Hayes met on the road, she ran into some luck as the woman’s sister was a nurse and told Hayes that an emergency room nearby had the rabies vaccine.

The woman drove Hayes to the hospital, and after about four hours Hayes was back on the road and continued to build her lead.

“Not only did I have to finish the race, but I had to hold my position. I worked so hard,” Hayes said. “I worked for more than two weeks for this, and (the dog bite) felt like a small obstacle at the time. Basically it was just another problem to solve. I didn’t think of it as a big issue, just a waste of time.”

Hayes said she set three goals before the race and completed all three: learning something new about herself, finishing in less than 20 days and finishing in the top 15-20.

One of the lessons she learned included the strength of women in the field. Both last year and this year three women finished in the top 10.

“The fact women are finishing that well suggests we have a proclivity for doing really well at these kinds of events,” Hayes said. “It’s nice to be part of a movement that’s demonstrating that.”

Hayes stayed around to cheer on finishers of the race then headed to Washington, D.C., to meet with family and friends. However, she said instead of taking a bike, she rode in an Uber.