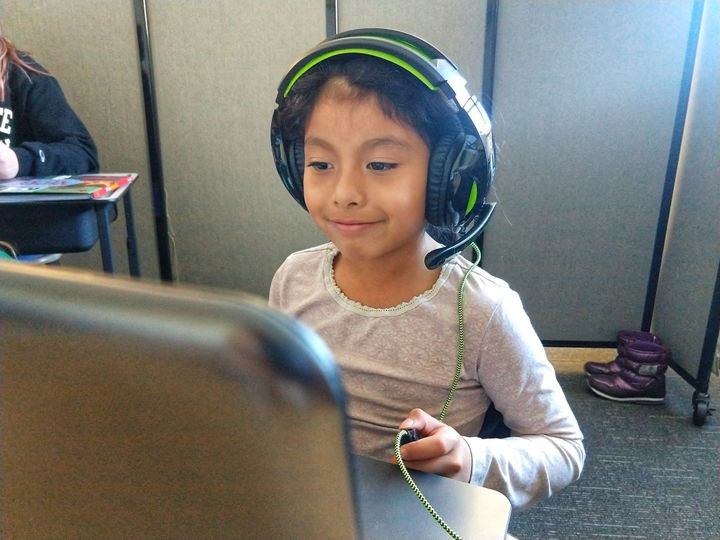 Elena Castro Guzman is one of the students who benefited from headphones provided by a teacher grant from Shavano Academic Booster Club. 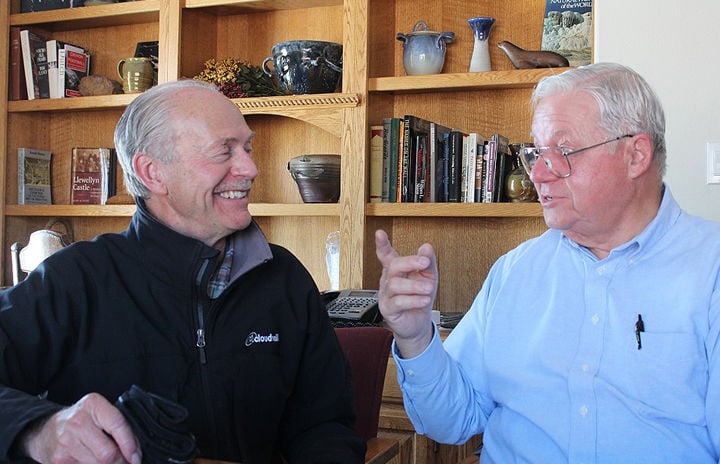 Elena Castro Guzman is one of the students who benefited from headphones provided by a teacher grant from Shavano Academic Booster Club.

The nonprofit organization began in 1989 when a rather unique group pooled their efforts to recognize the academic achievements of students as well as students who put forth special efforts in classroom participation and good citizenship.

“Back then, most of our CMC classes were held at SHS in the evening,” Michaud said. “I was passing through the cafeteria in probably January of 1988 when there was an athletic booster banquet going on. I was amazed at how much energy there was for the athletes.

“I described this to Carl Larson and said wouldn’t it be great if there was something like this to pat kids on the back for academics. We talked about it, and he and I drove to Montrose, where they had an Academic Booster Club, and we attended a board meeting. That club has been in existence about four years at the time. They were wonderfully gracious to us, and when Carl, a Rotary Club member, presented the idea to the Salida Rotary Club, they agreed to sponsor it.”

Ed Lambert and Nancy Wuerfmannsdobler had a similar idea and came on board, and Nathan Ward also became involved.

“My involvement in SABC started as an idea from my parents, Suzanne and Dave Ward,” Ward said. “Mom was a teacher at Longfellow and my dad was a member of the school board at the time. I participated in an international student exchange in Australia for half the year, and it made a huge difference in my life. It expanded my horizons and showed me the world far beyond Salida.

“My parents recognized what an incredible experience this was for me and encouraged me to help others do the same. At that time very few SHS students had been on student exchange. My parents suggested I start a group to raise money to help other students participate in international student exchanges based on academics and not athletics.”

For Ward, the original idea behind SABC was the student exchange. He approached his teacher Ed Lambert to help make it happen, and the circle expanded to include Michaud and Larson, who were both Rotary Club members. They suggested expanding the scope of SABC to include more than just exchanges. Ward agreed and SABC got its start.

“I don’t know if SABC ever helped send a student on an international exchange, but it has certainly helped support a lot of great academic endeavors in the Salida School District,” Ward said. “Years later, as a second-grader, my son, Kiam, received an SABC award.”

Ward graduated from SHS and went on to the University of Chicago and now travels the world as a writer and filmmaker. Larson, Lambert, Michaud and Wuerfmannsdobler went on to make SABC a reality.

Larson, who became SABC’s first president, died in 2007 after working on SABC for 17 years. He asked that memorials to him be made to SABC. Michaud moved from Salida in 1991 but returned in 2003 and was pleased to see SABC was still in existence. Lambert continued with the program for many years, as did Wuerfmannsdobler.

Today Shavano Academic Booster Club continues to present monthly awards to students and holds two awards ceremonies, one in January and one at the end of the school year, to recognize the students honored during that semester.

Teachers nominate the students, and each month a group of elementary, middle school and high school students is honored. Horizons Exploratory Academy and Crest Academy are included.

Teachers are also invited to submit requests for financial help with classroom projects, and scholarships are awarded to selected graduating seniors who have been named SABC students during their school years. In 2018 more than $5,000 in scholarships were awarded.

SABC is funded by sponsors and donations, so the gift packets presented at the semester’s end include gift certificates from sponsors along with commemorative plaques of recognition. Each student receives a flower and gets to hear his/her name and accomplishments announced before proudly walking across the stage of SHS auditorium with his/her parents to receive the award.

“It’s important to know that these aren’t always the straight-A students,” Lambert said. “Students are recognized for making special efforts. Sometimes kids grow up in troubled families, or they are having difficulties with a particular subject, or they are just helpful to other students. Sometimes special-needs kids are honored.”

Wuerfmannsdobler became the second president and was succeeded by Janet Burkhart in about 1995. Burkhart served eight years while her son was in school. She was also president of Longfellow Parents Association.

“I got involved because I enjoyed watching the kids get awards for academic accomplishments,” she said. “To me there was so much emphasis on sports, and it was good to see the recognition for academics. The kids are so proud to go on stage and have their principals announce their names and shake their hands.”

Charlie Rahe, a Longfellow teacher, was president for six years and stepped off the board two years ago when his last child graduated from SHS.

“Carrie Brantley (Longfellow teacher) encouraged me to become part of the SABC board, and I was a Longfellow representative from 2003 to 2010,” Rahe said. “Then I became president for six years.

“The best thing SABC does is recognize students for hard work and achieving their goals. It’s a good organization and helps kids improve.”

Johanna Hall, the current SABC president, said, “When children are recognized, they do better. It takes a lot of maneuvering behind the scenes to make this happen, but it is well worth it. There are many deserving students in our growing school district, so we strive to spread the recognition around so more students can receive the award.”

Teachers nominate students every month for academic excellence, classroom participation and good citizenship. Then photos are taken by professional photographer Tim Brown, who puts the SABC logo on them. Walmart sponsors the photos, which are then posted in 13 locations around town and published in The Mountain Mail along with information about the student and why he/she was selected.

“We don’t currently have a website, and do not have the capability to take donations online, but we do mail requests for donations and ask for help within the school,” Hall said.

Rahe noted, “None of this can be achieved without local businesses supporting SABC. The Mountain Mail has always been happy to give us newspaper space for the pictures and write-ups about the kids. Tim Brown does the photography and Walmart helps with providing the pictures free of charge. They are all good business partners.”

“We are currently looking for volunteers and board members. With a very small time commitment, people can get involved with SABC and do good work in the world,” Hall said.