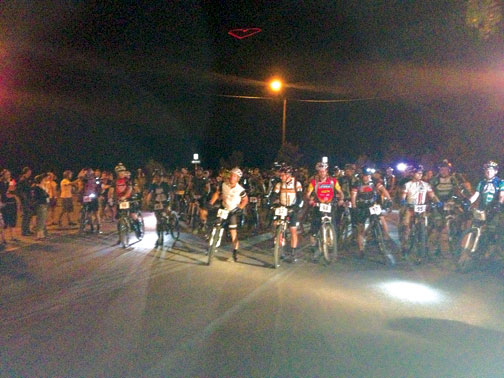 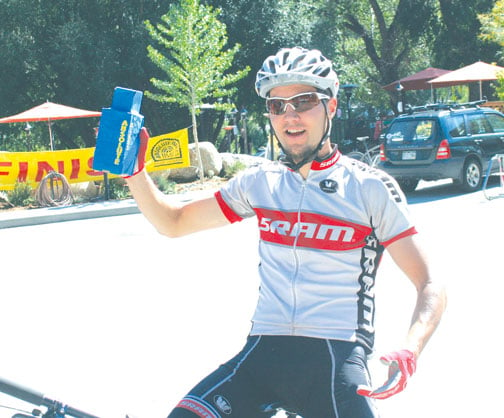 “It’s a struggle the whole time,” he said. “You’re first and foremost just trying to cross the finish line.”

Sixty-five riders participated in the event. The ride started at 10 p.m. Saturday at the F Street bridge in Salida. The event took the riders over the Alpine Tunnel, Tomichi Pass, Granite Mountain, Monarch Pass and on the Monarch Crest Trail, making the total climb around 20,000 feet.

“It’s an amazing event just because of the route it takes,” event helper Dena Gillis, Salida, said. “It follows the old train route, hence the name Vapor Trail. It’s a lot of old mining routes, so there’s a lot of beautiful places.”

It wasn’t Jakomait’s first time riding the event. He finished second 7 years ago but waited to try it again because the first time was so rough.

“It was so hard, I just stayed away from it for a long time,” Jakomait said. “I felt now was the time I should come back and give it another try.”

Despite most of the ride taking place in the darkness, many volunteers helped out to ensure the riders were doing fine throughout. All riders had their own set of lights either on their helmets or bikes. Each rider also had an attached spot tracker, which not only let people follow the race online but also helped organizers track the location of each rider.

The darkness also gave riders quite a view.

“The best part was being at the top of Canyon Creek in the middle of the night with stars everywhere,” Jakomait said. “It’s such a cool place. It’s so quiet and pristine. You just feel like you’re in your own special place up there. You’re away from civilization with just your bike.”

Several riders said that resting before the event was the best way to get their bodies ready.

“After my last race, I hadn’t really biked much in the past month, and I think that was key, just resting my body,” said Neil Beltchenko, Crested Butte, who finished second with a time of 13 hours, 5 minutes.

The riders also said there’s no other bike race like the Vapor Trail.

“This event is so unique because it’s such a supported race,” Beltchenko said. “Everyone out there volunteering was awesome and helpful. It’s not like the 100-mile races out here. Everyone’s nice, and I will definitely be back.”