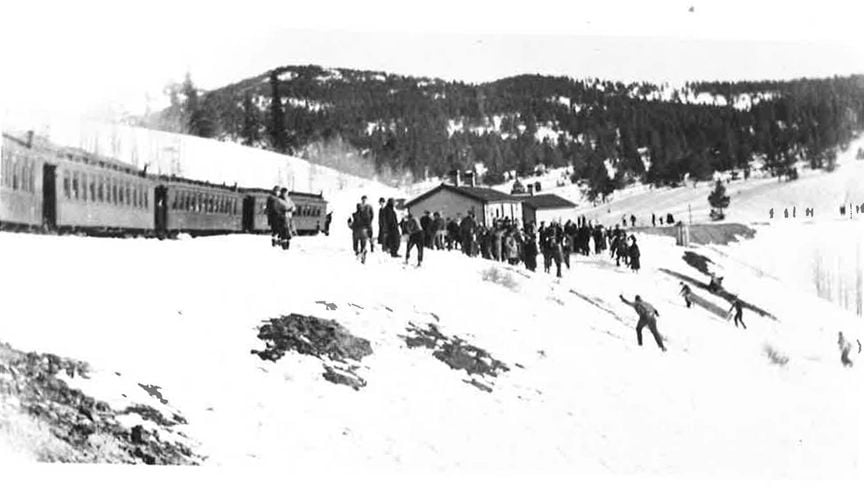 A total of 687 people descended onto the slopes of Marshall Pass in February 1938. A veritable who’s who of Salida was present, among them Mayor Claude Ferno, D&RG chief surgeon C. Rex Fuller, banker J. Ford White and chamber of commerce secretary Wilbur Foshay. Only one accident was reported: an out-of-control toboggan earned Ruth Darby a broken hip. 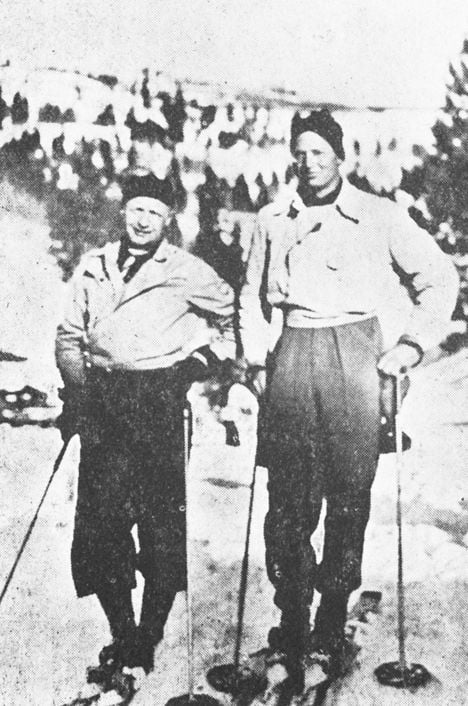 Western ski champions Frank Ashley and Thor Groswold “thrilled the crowd” at the Marshall Pass Ski Course. This image was taken by the Hay Studio and was published in the Salida Record. Besides photographs being snapped during the big day, a newsreel cameraman was on hand documenting the scene. Salida “Winter Sports Movies” were later shown in seven states in the Rocky Mountain West.

A total of 687 people descended onto the slopes of Marshall Pass in February 1938. A veritable who’s who of Salida was present, among them Mayor Claude Ferno, D&RG chief surgeon C. Rex Fuller, banker J. Ford White and chamber of commerce secretary Wilbur Foshay. Only one accident was reported: an out-of-control toboggan earned Ruth Darby a broken hip.

Western ski champions Frank Ashley and Thor Groswold “thrilled the crowd” at the Marshall Pass Ski Course. This image was taken by the Hay Studio and was published in the Salida Record. Besides photographs being snapped during the big day, a newsreel cameraman was on hand documenting the scene. Salida “Winter Sports Movies” were later shown in seven states in the Rocky Mountain West.

The Salida Ski Club was founded in the fall of 1937 with the intent of promoting winter sports in the Salida area. To that end, they formed an alliance with Denver & Rio Grande Western Railroad to organize a ski train.

At the time, the narrow gauge rails started across the river at the Denver & Rio Grande railyards and ran over Marshall Pass to Gunnison. Today, the beginning of this abandoned rail line is the Monarch Spur Trail.

The Ski Club’s plan was to work with D&RGW Railroad and set up a cheap train service that would take skiers from Salida to Marshall Pass. It was a perfect location. Skiers could unload and ski down the western side to the station of Shawano about 4 miles away, and an engine posted there would take skiers back up to the top of the pass.

That autumn, the U.S. Forest Service cleared out trees to make some nice runs come winter. In September, Frank Ashley, “Denver winter playground expert,” went up with some locals to inspect the course. He deemed it “perfect.”

A new position was created at D&RGW to manage ski trains. T.J. Flynn was appointed “Passenger Representative of Winter Sports.” In fact, T.J. was optimistic that at least one ski train could eventually be set up to run from Denver to Salida and then up to Marshall Pass.

A month prior to opening day, 40 skiers took the train up on their own and enjoyed some fresh powder. It was a jolly group according to the Salida Record: “Aboard the narrow gauge on the trip up the pass, the group sang songs, accompanied by Horace Frantz, Jr. on his accordion.”

With Salida humming in anticipation, the ski club chartered a train to Marshall Pass. Among events planned were skiing exhibitions and a special treat: included in the 75-cent round trip train fare was a free visit to the Salida Hot Springs Pool. The pool had recently been constructed with WPA (Works Progress Administration) money and was as yet unopened. Skiers could enjoy an après ski dip and make history at the same time, being the first to use the pool.

The big day was not just for skiers; it was to be a day for everyone. The president of the Salida Ski Club made an announcement in the local paper: “You do not have to be a skier to enjoy yourself on this trip. There will be tables for those who wish to play bridge and as the special train will be heated, those who don’t ski can remain in the warm coaches and watch the others enjoy winter sports.”

Gunnison heard about the Salida ski train and made plans to send its own train to the pass, $2 for a round trip ticket. A group of Puebloans was also due to arrive.

At 9 a.m. Sunday, Feb. 13, the sold-out Denver & Rio Grande ski train special left Salida with more than 400 people onboard. A baggage car held all the skis and toboggans.

Once at the summit of Marshall Pass, skiers disembarked and descended down the side of the pass to the little station of Shawano. It had been designated as a ski clubhouse for the day. The Gunnison delegation of more than 150 skiers had arrived earlier that morning and enjoyed first tracks. And the Pueblo delegation offered up 122, making it the largest group ever assembled on the pass.

It was a beautiful bluebird Colorado day. Count Phillipe du Pret, ski instructor at the Broadmoor and nephew of the president of the International Olympic Games, initiated a ski school, giving out instruction to first-time skiers. There was also an exhibition ski race with Phillipe racing ski champions Frank Ashley and Thor Groswold on a combination slalom/downhill course. Thor won the laurels of the day.

The Salida Daily Mail reported on the day’s events: “Those who did not indulge in the winter sports enjoyed the spectacle of a whole mountainside filled with jumpers. A special car was set aside to take the skiers back up the mountain from Shawano, which is a feature no other ski course enjoys.”

That evening when the train returned to Salida, a boisterous bunch of skiers stopped at the Salida Hot Springs Pool and celebrated until 10 o’clock that night.

Alas, the D&RGW’s dream of a financial windfall from ski trains would not last.

In summer 1939, the new, modern Monarch Pass was constructed at a cost of $1.5 million. It was the death knell for a potential ski resort at the top of Marshall Pass. Taking advantage of the new location, the Salida Ski Club, USFS and WPA got to work, and in February 1940 Monarch Ski Resort opened.

D&RGW continued to take skiers up to Marshall Pass, but it would never compare to that one magical day in 1938.

The Salida Ski Train only ran for two winters. After Monarch opened, D&RGW stopped the practice of picking skiers up at Shawano Station and toting them back up to the top of the pass. But they still operated a ski train of sorts. Bob Biglow, who grew up in Salida, remembered the fun times skiing up at Marshall Pass after its heyday:

“At the (Salida) depot on a Saturday morning, the train that went to Gunnison over Marshall Pass was dispatched and, in the caboose, would be several Salida people carrying their skis. We all got on that caboose at 6 in the morning. We took the train to the top of Marshall Pass, piled out … and there was a little bit of a depot there. We all gathered together and then took off skiing down the road that’s somewhat parallel to the railroad track. The road continued all the way down to Mears Junction. That’s where I learned how to ski. It was basically cross country, that sort of thing.

“Then, at Mears Junction, the train from Alamosa would show up at about 4 o’clock and bring us on down to Salida in the caboose again. It was a 12-hour deal, 6 to 6. Just a delightful experience. I started (skiing) in about 1948 and then the train quit running about 1954. There were several years there that we did that. Just truly a great experience, which I totally, totally miss. It didn’t cost anything, absolutely no cost involved. The railroad just gave anybody that wanted to go skiing a ride.”

The Marshall Pass rail line was abandoned in 1953 and the tracks torn up in 1955.