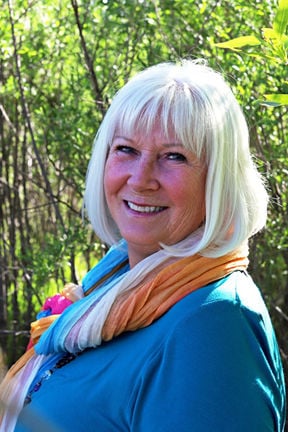 You may have heard about Ayurvedic medicine and wondered what it was.

Dr. Deepak Chopra is probably the best-known practitioner of this 5,000-year-old healing system that was founded in ancient India and is derived from the Sanskrit words ayus (meaning life) and veda (meaning wisdom).

Salidan Debbie Cassidy was prompted to train with Chopra in California at a workshop called “Journey into Healing” in 2012 after she developed asthma and began researching integrative philosophies. Dr. Andrew Weil, a pioneer in integrative/alternative medicine, was also at the workshop.

This led to her becoming certified at the Copra Institute in the three aspects of being a Vedic Master Educator – yoga, Ayurveda and primordial sound meditation. She has been teaching since 2014.

Cassidy is a registered nurse and has a master of science degree in nursing with a focus on nursing education and has combined benefits of the medical and integrative health and wellness fields into a second career as a Vedic Master Educator.

Her first career was as a surgical nurse, during which she was director of surgical services in several facilities in Oregon and Colorado, including Heart of the Rockies Regional Medical Center.

“Then I got asthma,” she said. “That was in the 1980s. I had been very active, hiking, running and climbing fourteeners. Suddenly I could no longer run or do the other things I loved. In the 1990s I started yoga and meditating, and six months after that first yoga class I climbed Mount Princeton with no inhalers. I still remember reaching the top and shouting, ‘I did it!’ I felt I was back to being me.”

That led to the research, which resulted in her training with Chopra.

“Ayurveda is the oldest healing system known,” she said. “It’s based on three doshas (personality types), vata, pitta and kapha. The different doshas each require certain things to keep body, mind and spirit in balance. I call it your inner pharmacy. It’s how our five senses affect our bodies.”

In a rather simplistic example of determining dosha, she gives the example of going to dinner with a friend and being late for the planned movie afterwards. The vata person would blame him/herself for causing them to be late. The pitta person would blame it on the kitchen staff in the restaurant and the waiter. The kapha person, being laid back, would say it’s fine to be a little late for the movie. They show previews anyway.

Changing of the seasons also affects the body. Winter into early spring is kapha season. Kapha people tend to have lung issues and are more susceptible to springtime allergies. Late spring and summer is pitta season. Pitta people can have heat rashes and be more sensitive to heat. Vata season is fall into early winter. These people tend to have irregular digestion and become depleted of energy.

Through meditation, exercise, nutrition and learning to pay attention to inner intuition specific to each dosha, Ayurveda keeps the body in balance.

Cassidy planned to share information on Ayurveda and primordial sound meditation in free talks in early April, but with the “stay-at-home” orders in place for COVID-19, that has been canceled. However, she plans to offer them when things get back to normal.