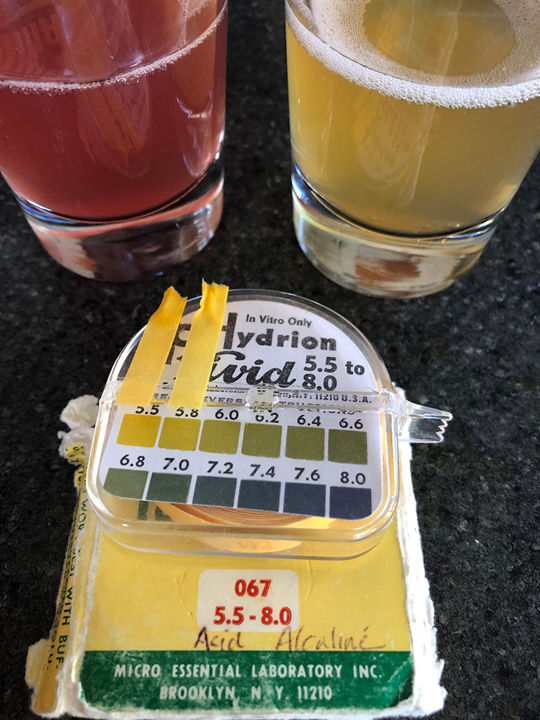 This photo of a pH test was taken on two kombucha teas. The yellow indicates extreme acidity.

This photo of a pH test was taken on two kombucha teas. The yellow indicates extreme acidity.

Sodas and candy aren’t the only things that are bad for teeth.

As Marianne Wancura of Salida Dental Hygiene is finding out, even “healthy” beverages can be damaging to tooth enamel.

“It seems that every few years we come up with new and quicker ways to ruin our teeth,” Wancura said. “I have seen several mouths lately that looked like they were the result of methamphetamine usage. When someone uses meth, they become so dehydrated many of them sip on soda pop 24/7. That is what destroys the enamel – not the meth itself.

“Kombucha tea has become a popular drink with some health benefits, but I’ve noticed in my practice that it can be as damaging to tooth enamel as soda pop. I’ve had patients come in for dental cleanings whose teeth are normally in pretty good condition, and now they’re not. They’re losing enamel on the inside of their teeth. When I ask about their diet, in several cases, they’ve been drinking a lot of kombucha tea.”

When acid liquids wash over the tooth, it gradually dissolves the enamel layer, resulting in cavities. Once the enamel is gone you can’t get it back. The amount of these drinks taken in a day increases the risk of cavities.

“I’ve had patients tell me that kombucha tea has helped with stomach problems, and that’s great – if they’re having stomach problems, but they need to be attentive to the damage they may be causing to their teeth,” Wancura said.

“I want to caution against steady drinking of kombucha or any sweetened soft drink. As with anything, moderation is the key. If you drink a sweetened beverage, rinse after drinking. Immediate rinsing is preferable to brushing because the acid roughs up enamel flakes, and if you brush you will lose enamel faster. Rinsing washes the acid off.”

The American Dental Association agrees. A statement from the ADA reads, “Kombucha tea is an acidic beverage. Foods and beverages that are high in acids wear away the enamel that protects your teeth, a process known as tooth erosion. This changes the appearance of your teeth and opens the door for bacteria that can cause cavities or infection.

“To reduce the chance of tooth erosion, make acidic beverages a treat rather than a regular habit. Drink it with a meal, use a straw so the acidic beverage has less of a chance of coming in contact with your teeth. After consuming any acidic beverage, it’s good to use a fluoridated rinse, which will reduce the damage and help keep acids under control.”

More information about acidic beverages can be found at MouthHealthy.org.

“Drinking water instead of sweetened drinks is safer,” Wancura said. “It’s the perfect drink. It has no sugar, no acid and no calories. Not nearly as much fun though. LOL!”

More information on tooth care can be found at salidadental.com under “Helps Through the Years.”